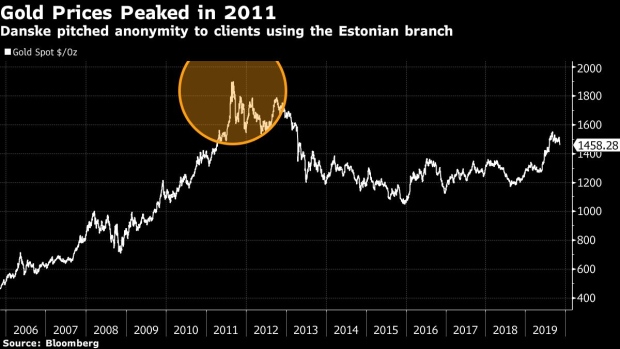 (Bloomberg) -- At the height of the Danske Bank A/S dirty-money scandal, the lender started offering gold bars to wealthy clients to help them keep their fortunes hidden, according to documents seen by Bloomberg.

The bank’s Estonian branch, which was already wiring billions of client dollars to offshore accounts, told a select group of customers, mostly from Russia, that they could now also convert their money into gold bars and coins, according to the documents, which date back to the middle of 2012.

Aside from offering a hedge against risk, Danske pitched gold as a way for clients to achieve “anonymity,” according to the documents. It also said that using gold ensured “portability” of assets, according to an internal presentation dated June 2012.

A spokesman for Danske Bank declined to comment. In Danske’s September 2018 tell-all report on its non-resident unit, the bank listed the services it provided to clients. Aside from payments, these included setting up foreign-exchange lines, as well as bond and securities trading. The bank didn’t list the sale of gold bars.

Danske Bank, which is being investigated across Europe and in the U.S. after failing to screen about $220 billion that gushed through its non-resident unit in Estonia from 2007 to 2015, has now shuttered the operations at the heart of the scandal. That’s after local authorities kicked Danske out, as the scope of the affair became clear.

Gold plays a special role in the historic ties between Russia and Estonia, which gained independence after WWI only to be swallowed up by the Soviet Union in 1940. A century ago, communists fresh from the Russian revolution used Estonia as a bridge to channel vast quantities of gold taken from the murdered family of Czar Nicholas II into the West.

In the early 1920s, about 700 tons of Czarist coins dodged a western blockade by passing through Tallinn with the knowledge of the country’s leaders, before heading for Scandinavia and the U.K. Today’s Russian elite may have used the same path.

It’s not known how much gold Danske managed to sell while the now defunct Estonian unit was still running. But according to an internal email seen by Bloomberg, at least some clients used the service. Local private banking clients were also offered the service.

For gold bars weighing 250 grams or more, clients at Danske’s non-resident unit could obtain the precious metal without a sealed pack or paper certificates. Anti-money laundering approval was needed before customers could collect the gold, but such approvals weren’t necessary if the gold was kept in long-term storage, according to the documents.

One Danske Bank presentation seen by Bloomberg and dated June 2012, when gold was trading close to an all-time high, told prospective clients that “the product is not being advertised publicly or in the media.” There’s no evidence that Danske continued to offer the service after 2013, when the price of gold tanked.

According to documents seen by Bloomberg, Danske’s Estonian branch sourced its gold from two partners, depending on the size of orders. One partner handled orders that exceeded 300,000 euros, equivalent to 6 kilograms at the time, and bought the gold from the Austrian mint; the other was used for smaller orders, according to the presentation, which didn’t name the suppliers. Danske charged a fee of 0.5% on larger orders, while smaller orders had a commission of as much as 4%.

Some of the documents promoting gold bars are signed by Howard Wilkinson, the whistleblower who brought the Danske Bank laundering scandal into the public light. His lawyer, Stephen Kohn, didn’t respond to an emailed request for comment.

Danske Bank is being investigated by the Department of Justice and the Securities and Exchange Commission in the U.S. In Europe, it’s the target of criminal probes by prosecutors in Denmark, Estonia and France. The bank has also had several class-action lawsuits brought against it, and its former chief executive officer, Thomas Borgen, is under preliminary criminal investigation in Denmark, along with many other former directors at Danske.

To contact the reporters on this story: Irina Reznik in Moscow at ireznik@bloomberg.net;Ott Ummelas in Tallinn at oummelas@bloomberg.net;Frances Schwartzkopff in Copenhagen at fschwartzko1@bloomberg.net