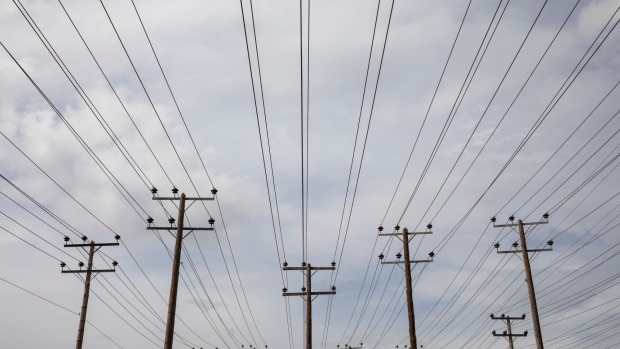 Electrical power lines hang from transmission towers at the Lignite Center of Western Macedonia, operated by Public Power Corp. SA (PPC), in Kozani, Greece, on Monday, Sept. 26, 2022. The economic damage from the shutdown of Russian gas flows is piling up fast in Europe and risks eventually eclipsing the impact of the global financial crisis. Photographer: Konstantinos Tsakalidis/Bloomberg , Bloomberg

(Bloomberg) -- The Nordic economies are facing recessions similar to their European peers due to soaring inflation and higher interest rates, with risks of a deeper plunge if energy prices surge in case of a cold winter, analysts at Danske Bank A/S said.

A strained natural gas-supply situation in Europe due to curbed shipments from Russia also affects the Nordic region, with Finland the most exposed to any further cost increases due to its higher use of electricity and market-sensitive prices, the Danish lender said in its new Nordic Outlook on Tuesday.

Swedish households and companies face a “toxic cocktail of economic shocks” after a surprisingly robust first half of the year, Danske said. The effect of a substantial decline in real wages will be compounded by clearly higher interest rates and a surge in power prices, it said.

While the bank raised its economic growth forecast for this year to 2.4%, it sees the “triple whammy” pushing the largest Nordic economy into a contraction of 1.2% in 2023, a gloomier forecast than those from other Nordic forecasters and the worst performance among the four countries.

“We are entering recession with open eyes” across the region, Danske said. “Our forecast is that this will just bring activity and employment back to more sustainable levels after the post-Covid overheating, but a worse outcome is a clear risk.”

The lender doesn’t expect a Swedish housing crash, projecting home prices to fall “another 10%” back to levels of summer 2020, it said. The window for the Riksbank’s interest-rate hikes from the current 1.75% is “relatively limited,” Danske said, reiterating its peak estimate of 2.5%, in line with the central bank’s own forecast.

Like its global peers, the Riksbank has been wrong-footed by inflation, with its target measure of consumer-price growth hitting another three-decade high of 9%. November’s rate meeting is set to be the last for Governor Stefan Ingves, whose term expires at the end of December after 17 years overseeing Swedish monetary policy.

Danske said confidence in the Riksbank’s policy-rate projections is “very weak.” The market is now pricing in further hikes of 160 basis points by May next year, it said.

“There is a risk that monetary policy might be tightened too much, leading to a deeper crisis,” Danske said. “Higher interest rates are also negative for house prices, which are expected to fall across the Nordics. Still, many households have strong buffers after low spending during Covid restrictions, and Nordic public finances are in a strong position if it becomes necessary to provide more assistance.”

(Updates with comments on Riksbank’s rate path from eighth paragraph.)