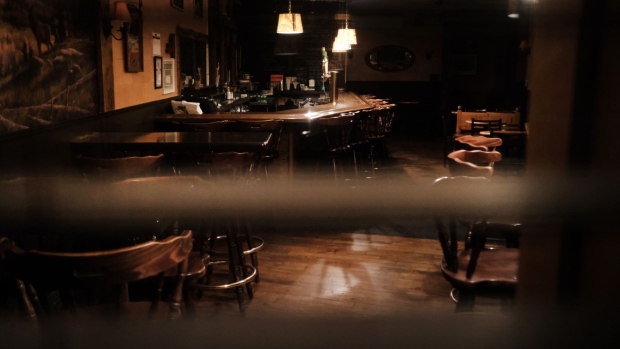 NEW YORK, NEW YORK - MARCH 16: A bar sits closed in the early evening in Brooklyn after a decree that all bars and restaurants shutdown by 8 pm in New York City as much of the nation slows and takes extra precautions due to the continued spreading of the coronavirus on March 16, 2020 in New York City, United States. Across the country schools, businesses and places of work have either been shut down or are restricting hours of operation as Americans try to slow the spread of COVID-19. (Photo by Spencer Platt/Getty Images) , Photographer: Spencer Platt/Getty Images North America

The closely watched report on U.S. unemployment filings was marred by a data-entry error for a second straight week, with the actual level of claims in a federal program one million lower than initially reported.

Massachusetts actually had 115,952 initial claims last week under the federal Pandemic Unemployment Assistance program, not the 1.18 million shown in the U.S. Labor Department’s report earlier Thursday, according to a state official. That means the 2.23 million reported figure for nationwide PUA claims was likely about half that number in reality.

The official said in an email that a “state data-entry error” led to the figure being inflated about 10-fold in the government’s weekly report.

The PUA figures are separate from the headline number tallying initial claims under regular state programs, reported at 2.44 million last week for the country. The unadjusted number was 2.17 million, 7.7 per cent less than the prior week. But some economists add this program’s recipients to the overall benefits level to get a more accurate look at the total number of jobless Americans seeking aid.

The errors complicate the task for those looking for signs of whether the pandemic’s impact on the labor market is ebbing. The claims data are among the most important of economic indicators because they can show early distress in the job market and any recovery, along with details at the state level.

The same kind of error affected data for Connecticut in last week’s national release. The state’s initial claims estimate was reported as 10 times higher than reality.

The Department of Labor didn’t have an immediate answer to requests seeking comment on the Massachusetts error. Following the release of inaccurate data last week, officials waited to revise the data in the following week’s release instead of issuing an immediate correction.

Aside from incorrect data, there are also quirks in state reporting that make a clear read difficult. California, for example, asks benefits recipients to recertify every two weeks rather than weekly. Other states do this too, but California’s large population -- combined with the surge in joblessness - has led its continuing claims figure -- the total number of residents on rolls -- to fluctuate wildly in recent weeks.