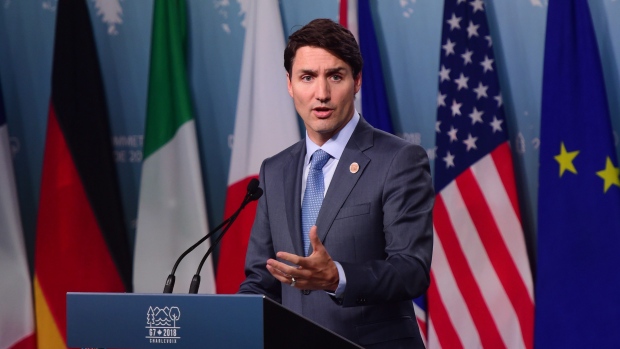 Justin Trudeau speaks at the G7 summit in Charlevoix, Quebec. , The Canadian Press

Governments that raced to the rescue as the coronavirus hit their economies now face the dilemma of whether to extend their massive bailouts of businesses and labor markets.

So-called cliff edges are emerging around the world as programs head for their expiry dates. The decision policy makers must make is whether to continue pumping cash into their economies in the hope of driving a rebound from the recession.

The risks of doing so are that the longer the intervention lasts, the bigger budget deficits will swell, and the return to business as normal will be delayed. 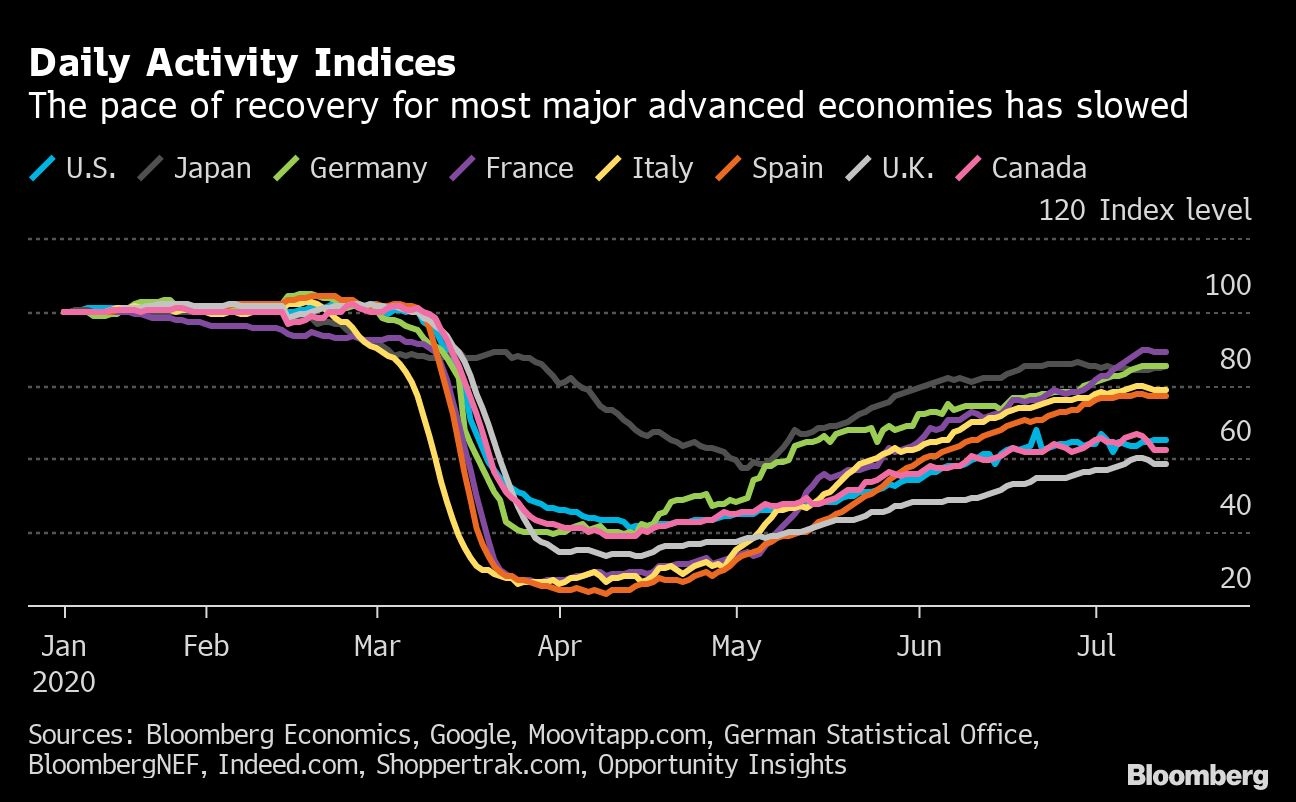 Here are the key dates in the Group of Seven economies, with analysis from Bloomberg Economics:

Companies and households don’t face a “cliff edge” so much as a slow petering out of multiple support measures that are likely to be reassessed and adapted as needed. That’s because one of the most significant policies -- wage subsidies for furloughed workers -- has been around in some form for more than a century, and companies regularly use it in times of economic weakness. The government offers up to 12 months of support, or as much as 21 months for businesses which began making use of it last year.

As for other measures, 25 billion euros (US$29 billion) of liquidity injections for small and medium-sized enterprises are due to expire at the end of August, while other tools such as a sales-tax cut and loan guarantees are set to last longer.

Companies generally point to the Fall as the point when they see aid becoming scarce, though Germany’s economy minister has said the government will reassess the situation at that point to see if further help is needed.WHAT OUR ECONOMISTS SAY: “By getting on top of the virus early and offering huge fiscal support, a substantial part of Germany’s economy will see a V-shaped recovery. Even so, some businesses won’t be back to normal capacity this year, or perhaps at all. The danger is that generous wage support delays a necessary reallocation of labor.” – Jamie Rush

The French government already reduced its financing for furloughs in June by leaving employers in most sectors to cover a slightly larger share of the cost of paying idled workers. Starting in October, the current system will be replaced by a new, standardized mechanism that is less generous for both employers and employees. However, France has also introduced a new tool that covers a larger chunk of lost incomes for up to two years if unions and businesses strike deals, typically including job guarantees.

State loan guarantees will be available to the end of the year, but the government is working on new tools to avoid a cliff edge. That would involve injecting some form of equity into smaller companies in collaboration with banks and private sector funds.

As part of its crisis fighting package, France also set up a “solidarity fund” to provide direct grants to cover the lost income of the self-employed and very small companies during the lockdown. Around 5 billion euros have been tapped from the fund, which remained open through June and will be available for the worst-hit sectors until the end of 2020.

WHAT OUR ECONOMISTS SAY: “The French government is gradually moving from blanket insurance to targeted aid and has already pledged to maintain generous support for the hospitality and tourism sectors, while tightening conditions for other businesses. This step by step approach is likely to pay off but won’t prevent job losses, as parts of the economy slowly rescale to the new environment.” - Maeva Cousin

The most dangerous deadline in the U.S. looms at the end of July when extra unemployment payments of US$600 a week are due to run out. Congress is deadlocked over whether to extend them. With jobless rates still near Great Depression-era levels, the Treasury paid out some US$116 billion of the benefits in June –- equivalent to more than 6 per cent of last year’s monthly GDP.

A mini-cliff comes at the end of September, when the freeze on student-debt repayments, which the New York Fed says is saving Americans about US$7 billion a month, is set to end. It’s also when the government’s payroll support for the biggest U.S. airlines, worth US$25 billion, is scheduled to run out. United Airlines already told almost half its U.S.-based workforce that their jobs will be at risk from the start of October.

WHAT OUR ECONOMISTS SAY: “If no action is taken, U.S. consumers will find themselves between a rock and a hard place with delayed payments coming due and no money to pay them. We believe Congress will agree on extended aid by the end of July. Still, less generous terms and an untamed virus means after an initial rebound, the recovery is set to be slow and shallow.” -- Yelena Shulyatyeva

Prime Minister Justin Trudeau is searching for a way to shift citizens from a $2000 (US$1,470) per month benefit fund back into the workforce. The $80 billion Canada Emergency Response Benefit runs until Oct. 3 -- a recently published government fiscal snapshot revealed plans to begin a transition in September.

The $82 billion wage subsidy plan, which gives employers 75 per cent of salaries for workers kept on the books, is is being extended until December. The administration’s most successful business program is the Canada Emergency Business Account, which provides $40,000 interest-free loans with $10,000 of that forgivable. Companies need to apply by Aug. 31 to receive the money and have until Dec. 31, 2022, to repay the government to benefit from the forgiveness.WHAT OUR ECONOMISTS SAY: “Well-targeted income support has been essential -- and expensive -- enabled by a strong federal fiscal backdrop ahead of the crisis. A minority government for PM Trudeau and the Liberals means each extension of aid will be a delicate process. On the left flank, the NDP warns against premature rollback while advocating a wealth tax, while Conservatives stress the worsening fiscal profile. Minority governments in Canada have difficulty lasting more than two years, and fault lines are brewing.” – Andrew Husby

The U.K. will begin tapering its furlough program -- which has helped support more than 9 million jobs by paying 80 per cent of their wages – in August, with employers gradually taking on more of the burden until it comes to an end on Oct. 31.That’s also the date on which support for 2.7 million self-employed workers will finish. Meanwhile, other stimulus measures announced by Chancellor of the Exchequer Rishi Sunak in July also have a firm end-date. The reduction in sales tax for hospitality firms expires on Jan. 12, while the removal of a levy of the first 500,000 pounds (US$627,000) of any house purchases runs out on March 31.WHAT OUR ECONOMISTS SAY: “As support is withdrawn in coming months, the hope is that the reopening of the economy will provide enough impetus to demand for most jobs to remain viable. More likely, consumer caution will hold the recovery back and a second wave of unemployment will hit in the Fall.” – Dan Hanson

Italy’s government plans to extend a ban on layoffs that is due to expire Aug. 17 until the end of the year. Furloughs have already been extended to 18 weeks from 14 weeks. Prime Minister Giuseppe Conte has said the country “doesn’t abandon workers” and will do whatever is needed to keep supporting the economy.So far Italy has passed 75 billion euros-worth of stimulus measures to prop up companies and workers damaged by the pandemic, and further measures are planned in July. A further 500 billion in government backed loans is available to small and medium-sized companies that have been damaged by the pandemic.

WHAT OUR ECONOMISTS SAY: “The Italian government eventually opened its purse strings wide, but the relief came late in the day. In all likelihood, some firms will go bankrupt and jobs will be lost. This damage will be hard to reverse.” – David Powell

March 31 is the current cliff edge for the Bank of Japan’s two lending programs and its additional buying of corporate bonds and commercial paper.The 100,000 yen (US$930) universal cash handouts approved at the end of April must be applied for within three months of the start date -- the time each local government started accepting applications varies.The deadline for applications for cash to help freelancers and small firms is Jan. 15. Japan’s furlough equivalent is an ongoing program that has been ramped up on a temporary basis until Sept. 30 this year to pay up to 80 per cent more per day.

WHAT OUR ECONOMISTS SAY: “Japan’s debt problem is getting so bad, Prime Minister Shinzo Abe’s administration doesn’t even want to think about it anymore -- that’s the uncharitable interpretation of its decision to not to include a road map for fiscal consolidation in this year’s basic economic policy framework, a first since Abe revived the annual big-picture policy plans in 2013. In reality, it was probably more a practical decision: the government’s focus is now squarely on rescuing the economy.” – Yuki Masujima