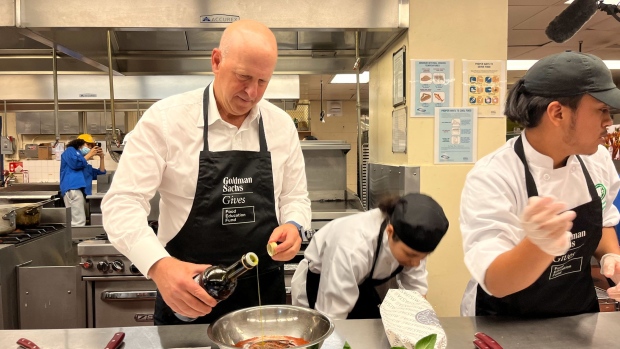 (Bloomberg) -- David Solomon is best known as the chief executive officer of Goldman Sachs Group Inc. who moonlights as a DJ.

His cooking skills are not as celebrated. But on Wednesday, May 11, he tried out a new gig: sous chef. At the Food and Finance High School in New York, Solomon donned an apron for a Top Chef-style cooking competition. His duties included prepping tomato sauce, checking the pasta for doneness, and plating the finished dish.

The event celebrated the donation of $600,000 from Goldman Sachs Gives—$100,000 of which came from Solomon himself—in partnership with the nonprofit Food Education Fund for scholarships for culinary arts high school students. The program will give students the chance to graduate from CUNY schools free of debt while gaining culinary experience.

“There’s more energy here than on a Goldman Sachs trading floor,” said Solomon in a speech to the audience that consisted mostly of the school’s students, before his cooking stint. He also announced a personal donation on top of his company’s charity program funds. In opening remarks, he said that he has been known to cook a turkey, as well as the occasional grilled cheese.

The theme of the 15-minute cooking competition, however, was pasta.

“Pasta sauce is new to me,” Solomon said.

Solomon’s three-person team competed against two other teams. One included NBA star and sports card investor Kevin Love—“I’m good at presentation,” he said as he grated lemon zest. The other team featured David Banks, chancellor of the New York City Department of Education.

The judges were Nicolas Jammet, co-founder and co-CEO of Sweetgreen Inc; radio host Dana Cowin; and Misi’s Missy Robbins, also chef and co-owner of Lilia. Her business partner, Sean Feeney, who is the board co-chair of the Food Education Fund and a former Goldman Sachs employee, got Solomon interested in the fund 2 ½ years ago. Feeney said the donation would help create “a fantastic new training and associate’s degree program that will enable students to sharpen their skills and get ahead.”

“The culinary arts is a part of the fabric of New York City, and I am excited to see all the amazing things our students create and accomplish,” said Banks. (Asked later if he would commit to donating $500,000, Chancellor Banks said, “We can’t all be Goldman.”)

Solomon’s anchovy pasta was not the winning dish. That accolade went to the spaghetti with pesto rapini from Banks’s team. “The anchovy pasta was a little salty,” confided head judge Robbins. “The pasta was very good,” said Jammet. “I would have eaten the whole plate.” But, they agreed, Banks’s pasta deserved to win.

Still, Solomon got high marks from his team’s head chef, Melina Sosa. “David did amazing,” said the high school senior, who taught Solomon to toss the pasta and sauce up in the air as he worked the stove. “He was in there, tossing pasta, tasting everything, checking the cooking.”

Robbins roamed the kitchen during the competition and approved of Solomon’s skills. After the event, she said he could come cook in the kitchen at Lilia with her. “It’s not easy to twirl the noodles,” she said. “And he did.”

Solomon declined. “I’ll go to Lilia to eat, not to cook,” he said. The afternoon’s event didn’t make him consider giving up his DJ gig in favor of more kitchen time. “Not happening,” he said. “But I will cook more this summer.”