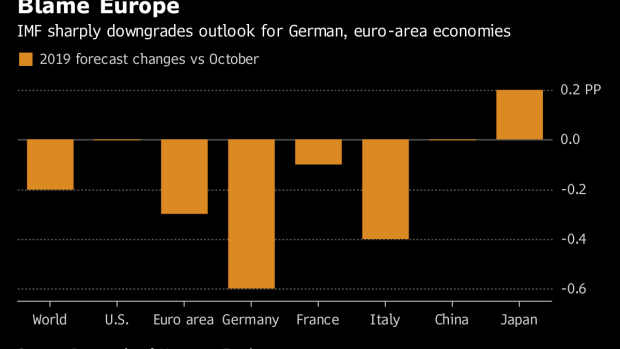 (Bloomberg) -- The global economy is stumbling but not falling over.

That’s the analysis of investors, bankers and former policy makers attending the World Economic Forum in Davos, Switzerland, as they argue the expansion is weakening but not by enough to generate a recession.

“We’re slowing, but we’re still growing,” said Philipp Hildebrand, vice chairman of BlackRock Inc. and a former Swiss central banker. “The chances of a recession short of a major mistake or accident this year are limited.”

Financial markets have wobbled in recent months, with the S&P 500 Index dropping 1.4 percent on Tuesday -- on concern economic weakness in the U.S. and China could barrel out of policy makers’ control and fears a trade truce may not hold. Other political flash points such as Brexit and the U.S. government shutdown have added to investors’ concerns.

The half-glass full attitude was on display in the International Monetary Fund’s updated outlook released on Monday. While it forecast this year would witness the softest global growth since 2016 of 3.5 percent, it left its estimates for the U.S. and China in 2018 unchanged and predicted a slight pickup worldwide next year.

“The bottom line is that after two years of strong expansion, the world economy is growing more slowly than expected and risks are rising,” IMF Managing Director Christine Lagarde said. “Does that mean that a global recession is around the corner? The answer is ‘no’.”

Davos delegates echoed that view about a decade after visitors to the Swiss alpine retreat failed to predict the 2009 recession -- the deepest since the Great Depression.

“I would not even call it a slowdown,” said Jacob Frenkel, vice chairman of JPMorgan Chase International. “There is already the ingredients of ‘gee, we’re about to enter another recession.’ That’s not the case.”

The chief concern is that Chinese officials prove unable to cushion their economy, the second biggest and responsible for about a third of global growth. Data released Monday showed 2018 was the slowest expansion since 1990 as the government tries to rely less on investment and debt while insulating demand threatened by the trade war.

“The biggest story in the global economy at the moment is the Chinese slowdown,” said Adair Turner, a former Bank of England policy maker and now chairman of the Institute for New Economic Thinking. “Right in the middle of that very difficult transition, which I think they were managing quite well, they were hit by the tariffs, hit by the trade war.”

Fang Xinghai, vice chairman of China’s Securities Regulatory Commission, said the trade tensions with the U.S. haven’t changed the long-term direction of the nation’s economy and that the slowing is “not going to be a disaster.”

Another risk cited in Davos is that central banks tighten monetary policy too aggressively. That’s becoming less of a threat given Federal Reserve Chairman Jerome Powell has indicated a willingness to be more patient after raising interest rates four times last year.

In the major economies there’s a “reasonable chance” that the reaction to fading growth will once again be looser monetary policy and fiscal policy than “what is now discounted in markets,” said Ray Dalio, the billionaire founder of hedge fund Bridgewater Associates LLC.

Still, there is concern in Davos that when the next recession hits, central banks won’t have the scope to react given rates will likely be lower relative to the eve of prior slumps.

“What scares me the most longer term is that we have limitations to monetary policy, which is our most valuable tool, at the same time as we have greater political and social antagonism,” said Dalio. “So the next downturn in the economy worries me the most.”

As for the U.S., even with its government partially shut down, Blackstone Chief Executive Officer Stephen Schwarzman said it will still grow at least 2.5 percent this year, avoiding recession.

Unemployment near the lowest in 50 years is a key positive as it fans faster wage growth.

To contact the editors responsible for this story: Stephanie Flanders at flanders@bloomberg.net, Malcolm Scott, Chris Bourke