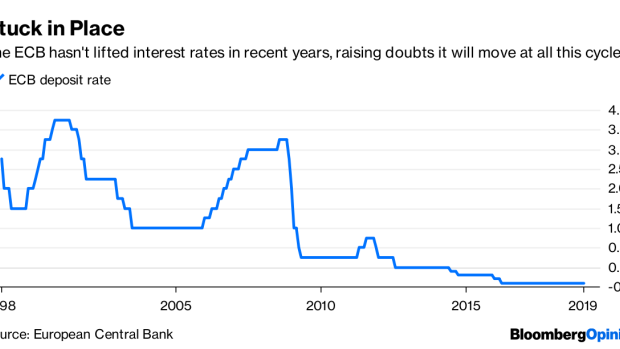 (Bloomberg Opinion) -- If there were still any doubts that the Federal Reserve is stuck in place, the World Economic Forum’s annual meeting in Davos should put them to rest.

As the gathering of global elite got underway, investors and even former central bankers were quick to cast blame on the Fed and its counterparts for disrupting financial markets in the final months of 2018. Ray Dalio of Bridgewater Associates LP chalked it up to an “inappropriate desire” to tighten monetary policy faster than markets could handle. Philipp Hildebrand, vice chairman of BlackRock Inc. and a former governor of the Swiss National Bank, said “the key risk is a policy mistake,” given that the outlook for global growth is slowing, according to the latest forecast from the International Monetary Fund.

At the same time, Hildebrand said: “What worries me most is if we were to run into a serious problem, a recession or something worse, we would have very limited firepower left to respond to it.” UBS Group AG Chairman Axel Weber, a former president of the Bundesbank, lamented that central banks didn’t raise rates during better times. Now, he fears the European Central Bank may never escape its negative-rate policy.

These seem like self-serving comments from the Davos elite. As the saying goes, you can’t have your cake and eat it, too. If the Fed increases interest rates again, it would move closer to historical averages and give policy makers more flexibility to combat a downturn. But such a move would almost certainly roil markets, given that fed funds futures are pricing in just a 14 percent chance of a move by the end of the year. Weber’s hypothetical past was never really possible: For years, especially in Europe, markets weren’t remotely close to embracing a faster pace of monetary tightening. In many ways, they still aren’t.

In this context, with concerns about global growth reaching a fever pitch, is it any wonder that Fed officials have rapidly shifted their tone in 2019? No one wants to be a scapegoat, even if that’s effectively become part of the job description.

Admittedly, it hasn’t been easy for policy makers to unwind the actions taken after the financial crisis, namely keeping rates close to zero for years and initiating unprecedented bond-buying programs. In 2013, just the suggestion by Fed Chairman Ben S. Bernanke that the central bank could soon scale back debt purchases pushed 10-year Treasury yields higher by more than a percentage point over four months, in an episode now known as the taper tantrum. ECB President Mario Draghi took much longer to halt quantitative easing, most likely to avoid a sharp market reaction.

But in its abundance of caution, the ECB may have missed its chance to raise interest rates. This now poses a dilemma for policy makers, which were aiming to boost rates in summer 2019, as my Bloomberg Opinion colleague Mohamed A. El-Erian recently outlined:

“This less favorable growth environment significantly complicates the policy outlook for the ECB. On the one hand, leaving its policy guidance unchanged risks unsettling markets, which would raise borrowing costs and increase the headwinds to growth. On the other hand, with policy rates already negative in nominal terms, and with a return to quantitative easing likely to face political opposition, the central bank has little ammunition to counter the slowdown.”

The ECB, which meets this week, truly appears to be in a no-win situation. At least Fed officials, who now stress “prudence, patience, and good judgment,” can view the past two years as a valiant effort to normalize policy. Since December 2016, they’ve raised interest rates eight times and cut the central bank’s balance sheet by almost $500 billion. All the while, the S&P 500 Index remains within striking distance of a record high, thanks to Fed Chairman Jerome Powell capitulating to the year-end volatility in equities and stressing data dependency in the months ahead.

In fact, it’s hard to envision how the Fed could come off as more dovish at this point, unless U.S. economic data worsen. That’s one reason Charlie McElligott, a cross-asset strategist at Nomura Securities, said S&P 500 futures could soon fall more than 5 percent. The benchmark index was heading in that direction on Tuesday.

Of course, it’s fair for Davos attendees to fret over the possibility of a recession, now more than a decade past the financial crisis. But it’s disingenuous to try to pin blame on central bank decisions, both past and future, rather than also considering the role of companies and investors who were (and remain) hooked on easy money. UBS’s Weber said “I think it will be mission aborted” for the ECB as far as normalizing interest rates this cycle. If that indeed comes to pass, many parties will share culpability.

Maybe Citigroup Inc. Chief Executive Officer Michael Corbat had it right last week when he said: “We see the biggest risk in the global economy as one of talking ourselves into a recession.” Where was this consternation about global monetary policy in early September, when traders were moving toward pricing in two Fed rate increases in 2019, even with Citi’s U.S. economic surprise index at the same level it is now? When did the balance sheet runoff become such a scary exercise?

Regardless, credit Fed officials for picking up on the changing mood and adjusting their messaging accordingly. The same malleability can’t be ascribed to government leaders in the U.S., U.K. and elsewhere. Central bankers aren’t perfect, but they’re also not the scapegoats that markets are looking for.