It was another day of euphoria for Bitcoin boosters and the options-slinger set as virtually all their favorite things launched skyward.

Just a day after violence rattled the U.S. Capitol and sent shockwaves through the nation, market exuberance showed no signs of slowing down. Stocks rallied with about 70 per cent of the companies in the S&P 500 gaining, while Bitcoin cracked a record high above US$40,000 and options activity soared.

Speculative mania is snowballing as assets rise in almost perfect proportion to their embedded risk. That’s a fact that concerns Wall Street’s more sober-minded observers, who say that while owning fringe assets always looks like genius in a rising market, recklessness gets exposed when the tide turns.

“When you’re buying these high-flying stocks after such a huge run-up, investors risk getting caught on the wrong side of that trade,” said Candice Bangsund, a portfolio manager at Fiera Capital Corp. “Things could start to unravel pretty quickly.”

The poster child for market exuberance -- Bitcoin -- has doubled in value in less than a month, with its advance swelling the total market value of cryptocurrencies beyond US$1 trillion. Crypto enthusiasts, many of whom feel validated that the coin has reached these levels after years of ups and downs, celebrated on Twitter, posting pictures of fireworks and rocket-ship emojis alongside Bitcoin price charts that depict the surge.

Amid the flood of demand, Coinbase Inc., the largest U.S. digital-asset exchange, experienced “connectivity issues” on its website and mobile app for a second day.

Adjacent companies caught a serious bid as well, with equipment maker Ayro Inc. up 13 per cent and Nio Inc. rising 7.5 per cent. Blink Charging Co. gained 6.8 per cent, extending its advance since the end of October to 470 per cent. 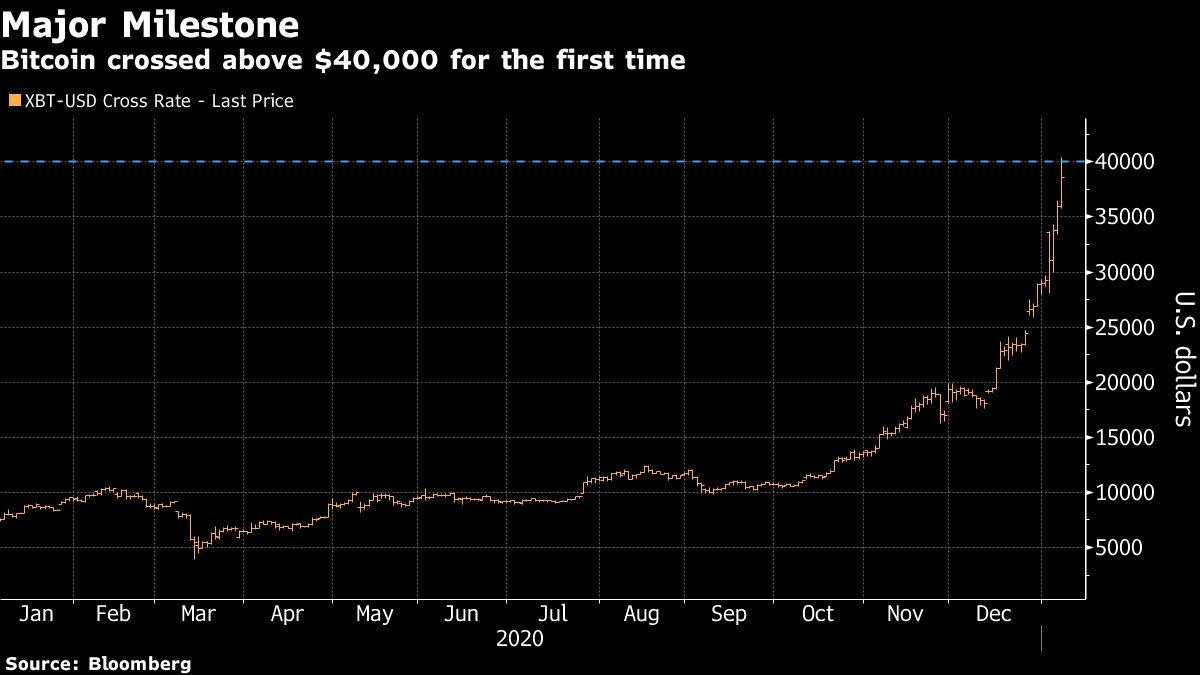 “The markets really are very exuberant and what I think they’re reacting to is, they look forward, everybody knows that, and I think they’re expecting super-stimulus,” said Kim Forrest, chief investment officer of Bokeh Capital Partners. “When people are putting money to work, well it gets to work and it bids prices up.”

In the options market -- a favorite of speculators gunning for big gains -- more than 46 million contracts traded Wednesday across U.S. exchanges, the sixth-most active day in history. The other five all occurred in 2020, data compiled by Bloomberg show. Even amid political unrest, most bets placed by traders were bullish, with almost 30 million call contracts changing hands, the fourth-most on record.

The fever is evident in even the most unlikely places. In a note to clients Wednesday, Julian Emanuel, BTIG LLC chief equity and derivatives strategist, recounted observing a heated discussion between a cashier at a gas station and a fast-food worker on the merits of owning short-dated call options on growth stocks like electric vehicle and genomics names. After joining the discussion, he found out that neither of them had traded stocks or knew what an option was before June.

“Not only are the public’s animal spirits alive and well, but their investing flexibility would seem ready for the next test,” he wrote.