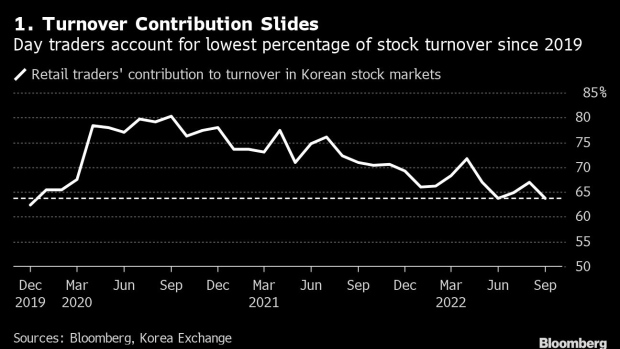 A foreign currency dealer speaks on a telephone in a dealing room of Hana Bank in Seoul, South Korea, on Friday, Feb. 28, 2020. Fear tightened its grip on global markets Friday, with European stock futures tumbling 4% and U.S. contracts signaling yet more pain after the biggest one-day rout on Wall Street since 2011. Photographer: SeongJoon Cho/Bloomberg , Bloomberg

(Bloomberg) -- South Korea has been one of the world’s worst-performing equity markets this year and its decline has been aggravated by the extreme bearishness of its retail investors.

Day traders in the nation, who typically step in to buy on dips, have instead stayed on the sidelines as the Kospi Index has extended this year’s losses to about 25%. They have also bought the most put options on local shares since the height of the pandemic, and been forced to make the most margin calls in more than a decade.

Their bearishness offers reasons for both pessimism and optimism. Pessimism as Korea is something of a bellwether for global markets given its close correlation with world trade. There’s also potential optimism, as a full capitulation by the nation’s day traders may be a sign the global selloff may be nearing a bottom.

Korea’s day traders usually step up their presence in the market during a selloff -- as was the case in the pandemic rout in 2020. Their contribution to total equity turnover climbed above 80% later that year, helping to power the Kospi’s 31% rally in 2020.

Last month however, their proportion of turnover fell to just 63.7%, the least since December 2019, before the global outbreak of the pandemic.

At the same time as their contribution to total turnover fell, the amount of margin trading by retail investors also declined. The amount slipped to 16.8 trillion won ($12 billion) this month, the lowest since late 2020, down from a high of almost 26 trillion won in the months following the pandemic.

“There are several signs of capitulation,” said Han Jiyoung, an analyst in Seoul at Kiwoom Securities Co., one of the most popular brokerages among individual traders. “We can presume that day traders have somewhat surrendered as leveraged trading is the first to blow up when markets fall.”

A further sign of bearishness among day traders has been a spike in the amount of put options they have purchased. The amount of bearish bets made by retail investors rose to 38 billion won on Sept. 26, the highest since March 2020.

Still, that can be read in a positive way too, as previous increases in put purchases have been followed by a rebound in the Kospi.

“Options trading by retail investors is a speculative trade -- they buy options like they buy a lottery,” said Heo Yule, a derivatives strategist at NH Investment & Securities Co. in Seoul.

A further bearish development for Korea’s day traders has been the jump in margin calls as the market has slumped. About a fifth of the volume of short-term margin trading was forcefully liquidated on Sept. 27, about double the recent average and rising above 20% for the first time since July 2009, according to data from Korea Financial Investment Association.

While some see the collapse of confidence by Korea’s day traders as a sign of capitulation that may be followed by a rebound, others see it merely to indicate further losses are ahead.

“We have reached a short-term bottom but it’s hard to say that we have reached a rock bottom,” said Lee Kyoung-Min, a strategist at Daishin Securities Co. in Seoul. There are still day traders nursing losses who are yet to surrender, he said.