On Monday at around 1 p.m. in New York, just as U.S. stocks were gripped by the worst trading session in months, Google searches for the “Dow Jones” spiked.

By the closing bell, the Dow Jones Industrial Average had clawed back some of the biggest losses, and the next day posted its best performance in a month.

This week is lesson to everyone on Wall Street who thought the day-trading army had beaten a retreat: They snapped up stocks at the fastest clip on record, pouring around US$2.2 billion into equities on Monday alone, according to Vanda Research.

Even as the stimulus check giveaway fades and the stay-at-home era peaks, the Reddit-fueled, Robinhood-powered retail crowd remains a force to be reckoned with -- their dip-buying set the stage for the S&P 500 to hit a record Friday. 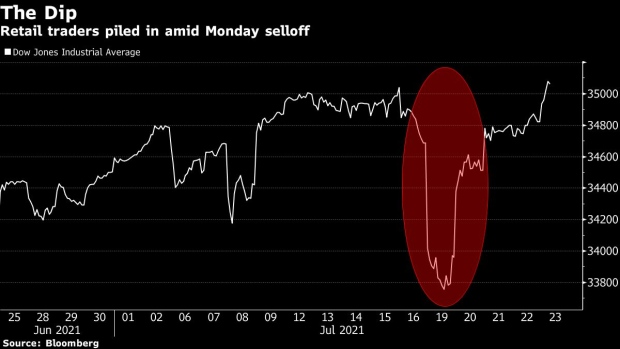 A study from DataTrek Research suggests Google searches for the Dow are a tell-tale sign for retail buying sprees ahead -- a pattern that played out this week.

“Over the years we’ve found that this is the most used U.S. search term for anything stock-market related,” Nicholas Colas and Jessica Rabe wrote in a note. “The data here shows that yes, retail investors took note of Monday’s decline (peaking at 1 p.m. in New York, as noted) and were most engaged right after Tuesday’s open.”

Yet disappointing U.S. jobs data Thursday and the surge in the delta virus variants are signs that the post-lockdown economic recovery will prove an uphill battle for policy makers, with fears of peak growth ostensibly the reason why global markets plunged Monday. 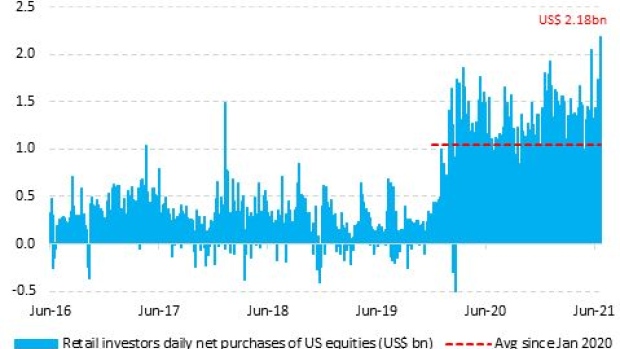 And even in the retail stock-buying data, market bears can see plenty of reasons for caution. Vanda, which tracks traffic on trading platforms and order flows, estimates they poured US$482 million into the SPDR S&P 500 ETF Trust (ticker SPY) on Monday, the highest amount on record.

That suggests the day-trade contingent lacked the confidence to pick individual shares, while stocks linked to the reopening saw a 40 per cent fall in buy orders versus the June 28 selloff.

“Institutional investors were dumping the stocks but found little interest from the retail crowd, making the sell-off even more violent,” strategists Ben Onatibia and Giacomo Pierantoni wrote in a weekly note.

Meanwhile, even as all signs suggest corporate earnings growth will beat expectations, it looks like big investors are beating a retreat in key trading vehicles. SPY, the Invesco QQQ Trust Series 1 (QQQ) and the iShares Russell 2000 ETF (IWM) have seen more than US$7.5 billion in combined outflows in the week through Thursday, according to data compiled by Bloomberg. 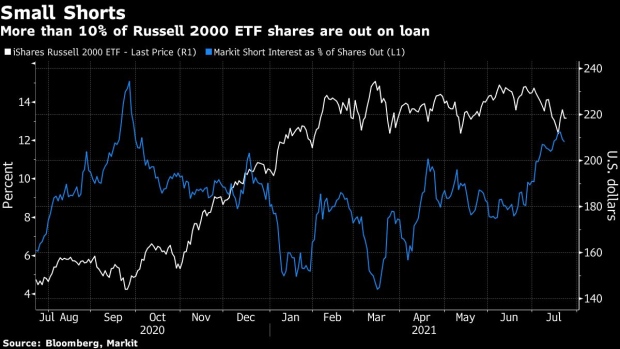 Short interest in the small-cap ETF is near the highest since September, based on the percentage of shares out on loan, according to data from Markit Ltd., suggesting investors are betting against companies acutely tied to the domestic business cycle.

All the same, retail investors have plenty of spare ammunition to save the stock rally again, with DataTrek estimating around US$400 billion in dry powder.

“Unlike some institutional investors who might find themselves starved for new funds, most retail investors enjoy a stream of income (payroll, dividends, rentals, etc),” Onatibia and Pierantoni at Vanda wrote. “Hence, we wouldn’t be surprised to see strong retail purchases going forward but their appetite to buy anything riskier than indexed funds and blue chips seem limited for now.”

--With assistance from Claire Ballentine.