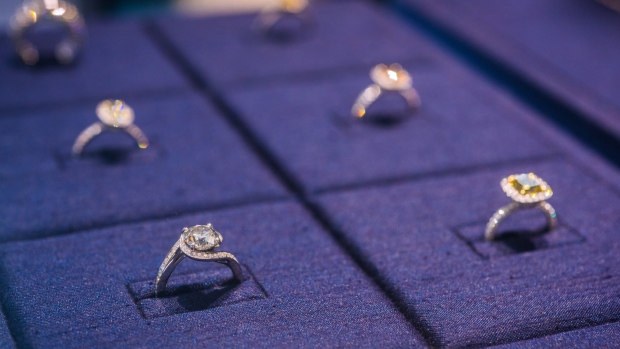 Diamond rings are displayed in a cabinet inside a De Beers SA store in Hong Kong, China, on Thursday, Sept. 14, 2017. , Calvin Sit/Bloomberg

De Beers has finally decided to cut the price of its diamonds in a bid to spark sales after the coronavirus pandemic paralyzed the industry.

De Beers, the world’s No. 1 producer, told customers that it is cutting prices for larger stones by almost 10 per cent at its sale starting this week, according to people familiar with the situation, who asked not to be identified as the details are private.

The Anglo American Plc unit, along with Russian rival Alrosa PJSC, had previously tried to defend the value of the gems as the pandemic hammered the sector. With jewelry stores closed, cutters and polishers stuck at home and global travel at a standstill, the entire diamond industry ground to a halt.

In the second quarter, De Beers and Alrosa sold a combined US$130 million in rough diamonds, down from US$2.1 billion a year earlier.

De Beers lowered the price of rough diamonds bigger than 1 carat, a size that would normally yield a polished gem of about 0.3 carat in size, the people said. The company held the price of smaller stones as there is very little demand for them and lowering prices by a similar amount would be unlikely to spur demand, they said.

Before the price cut, De Beers had made major concessions to their normal sales rules -- allowing customers to renege on contracts and view diamonds in alternative locations. Still, smaller rivals were selling at a 25 per cent discount, eating into the company’s market share.

The cuts show the company believes there is now demand, albeit at a lower price point. Most big diamond cutters and polishers haven’t bought any material amount of stones since February and their inventories are running low.

The ultimate recovery of the industry will depend on consumers returning to jewelry stores. While demand has recovered in China, the U.S. remains the most important market, accounting for nearly half of all sales.