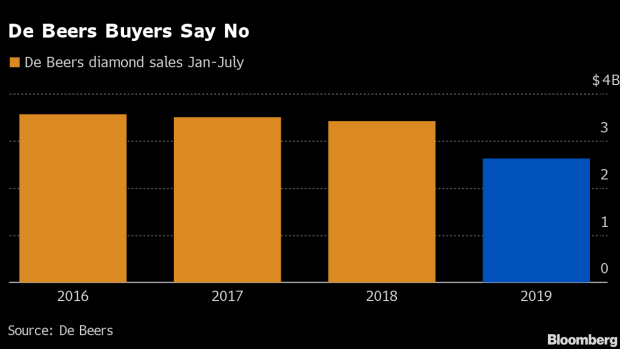 The Anglo American Plc unit has told customers they can refuse to buy half of the stones offered that are smaller than three-quarters of a carat, according to people familiar with the situation, who asked not to be identified as the matter is private. Buyers will also get the option to sell back some diamonds to De Beers on favorable terms, the people said.

De Beers’s greater flexibility comes as high stocks of polished gems and a tightening of bank financing cuts margins for polishers, traders and cutters, with many saying they can’t make money on rough diamonds sold by the company. At the same time, demand for diamond jewelry is stagnant.

“De Beers is working harder to offer its customers flexibility to try to tackle short-term issues,” said Anish Aggarwal, a partner at specialist diamond advisory firm Gemdax. “But in the longer term, it’s about aligning the rough situation with polished demand.”

De Beers sells its gems through 10 sales each year in Botswana’s capital, Gaborone, and the buyers -- known as sightholders -- have to accept the price and the quantities they’re offered. The sightholders are given a black and yellow box containing plastic bags filled with stones, with the number of boxes and quality of diamonds depending on what the buyer and De Beers agreed in an annual allocation.

This year, buyers have grown increasingly frustrated with the cost of rough diamonds sold by De Beers as the prices of polished gems slumped. The company’s first-half profit dropped about 30% as sales declined.

De Beers has responded by letting sightholders lower their annual quotas and defer purchases. Chief Executive Officer Bruce Cleaver said last month that he accepts it’s not an easy time for clients, but that the company sees no structural problems in the industry.

In the sale next week, De Beers will let so-called buybacks increase to 20%, the people said, meaning sightholders can remove up to a fifth of the diamonds in a box and De Beers will lower the price by a similar amount. The measure could allow buyers to increase profits since the rejected stones tend to offer the slimmest margins.

An oversupply of smaller stones at the bottom end of the market has led to the collapse in the value of many smaller diamond producers.

To contact the editors responsible for this story: Lynn Thomasson at lthomasson@bloomberg.net, Dylan Griffiths, Alastair Reed