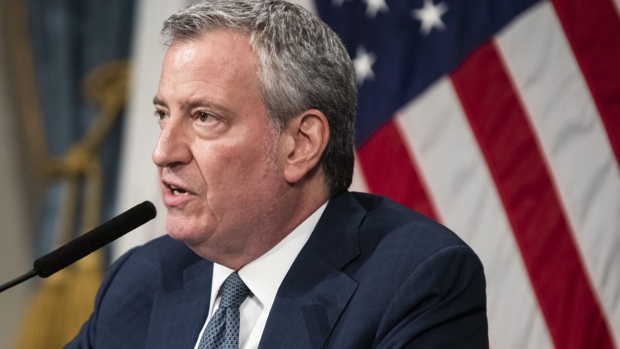 The visit, the mayor’s first since 2017, comes a week after two incarcerated individuals died in custody at the jail, marking 12 deaths connected to the facility this year. The fatalities, coming after years of reports describing inhumane conditions, have reignited calls to close the jail sooner than the mayor’s 2027 time line.

“We’ve got a lot of changes we have to make and what I came here to see was the work that was being done to immediately address the problems,” de Blasio said, identifying as goals reducing the inmate population, increasing health care staff, speeding the intake process and ending staff absenteeism.

Corrections officers have added to the crisis by skipping work en masse, forcing others to work triple shifts and leaving posts unstaffed. Daily absences have averaged 2,700 per day, about a third of the staff, up from 400 to 500 before the pandemic, according to Corrections Commissioner Vincent Schiraldi. The city has sued the correction officers’ union, accusing it of an unauthorized work stoppage.

Corrections officers will be coaxed back to work with a combination of incentives and punishments, with specially assigned police and private security to fill in as needed, the mayor said.

“The folks who are not doing their job will suffer the consequences,” de Blasio said.

The mayor also said during his morning briefing that he intends to further reduce the jail population -- which was more than 7,000 two years ago and is now 5,600 -- to less than 5,000 “in the weeks ahead.”

Governor Kathy Hochul signed legislation that resulted in the release of roughly 200 incarcerated people and diverted others housed at Rikers for more than 90 days to state facilities. Still, there are thousands said to be dealing with lack of food, water, cramped and unsanitary conditions, and violence due to staff shortages at the jail.