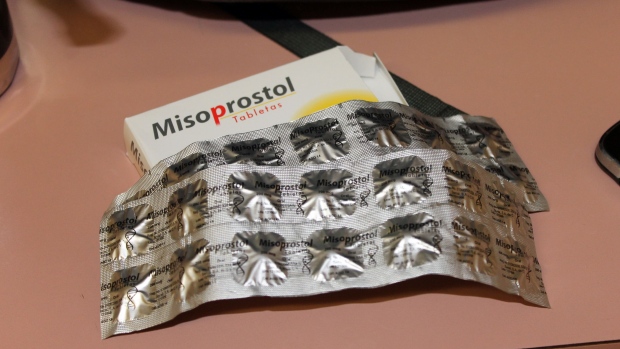 It's easy to buy the generic version of Cytotec, Misoprostol, which women use to induce abortion unsupervised, at pharmacies in Mexico. No prescription is needed there and it's much cheaper than obtaining medication abortion at a legal clinic in the U.S. , Ella Ceron

(Bloomberg) -- TikTok and other social media platforms are attempting to clamp down on posts highlighting certain toxic herbs that some say might stop a pregnancy, as doctors sound the alarm over their potentially fatal effects for the person taking them.

The posts appear to be warnings on substances that pregnant people should avoid, while providing detailed information on how they could cause miscarriages when ingested. Medical professionals saw an uptick of such content after a draft Supreme Court opinion overturning Roe v. Wade — a law that provided federal protection for abortion rights for five decades — was leaked in May, and even more after that decision was confirmed the following month. Rolling Stone reported that some hashtags and videos on TikTok especially have been viewed hundreds of thousands of times.

They became so prevalent that Josh Trebach, an emergency physician and medical toxicologist, was compelled to tweet on the dangers of such posts.

“There is no herbal or plant or tea or tincture-based method of abortion that is safer or more effective than the current medical standards of care,” Trebach said, stressing that the Food and Drug Administration has approved mifepristone and misoprostol as medication abortion pills.

A Twitter spokesperson said the company would "continue to elevate credible, reliable information," which includes efforts to curb misinformation before it roots. The platform's rules do not prohibit discussion about abortion, the spokesperson added.

Trebach and other doctors are taking to social media to detail how some of the herbs highlighted in these posts may lead to serious health complications — even death.  Some herbalists and witch practitioners are also worried and are pushing back against posts, which they believe misrepresent the work they do, Input magazine reported.

One of Trebach’s tweets debunking the use of pennyroyal oil, which is an extract of the mentha pulegium plant and contains a toxic substance, has racked up thousands of retweets. Any form of ingestion can lead to liver tissue death and cause a variety of symptoms including vomiting, seizures, liver and kidney failure, as well as death, Trebach said. People seeking medication abortion support should reach out to vetted advocacy organizations, as well as their own doctor if they have access to one, he added.

Doctors are increasingly worried about the posts at a time when dwindling access to abortion is increasing desperation to end pregnancies among people who live in states where it’s illegal.

“Misinformation can be harmful because it may lead people to try to end their pregnancies in an unsafe way, potentially exposing them to serious bodily harm,” said Nisha Verma, an obstetrician, gynecologist, and abortion provider with the American College of Obstetricians and Gynecologists.

People seeking support online for medical concerns isn’t new. A widespread shortage of baby formula prompted some to follow “ at-home” recipes. The Covid-19 pandemic led to unsubstantiated social media advocacy for the anti-parasitic drug ivermectin as treatment, though any claims of its efficacy have since been debunked in a study published in the New England Journal of Medicine in March this year.

The FDA in February cautioned against the use of homemade infant formula in any circumstances, and last December advised against using ivermectin as a Covid-19 treatment. Representatives for the agency did not immediately respond to a request for comment regarding social media posts about herbs believed to cause abortions.

“The spectrum of approaches people have used to try to induce an abortion ranges from the less effective or ineffective (herbal treatments) to the unsafe (chemicals or incorrect medications) to the dangerous (physical harm),” said Megan N. Freeland, a Doctor of Pharmacy and the director of health communications at Planned Parenthood Federation of America. “The most effective, well-studied regimen for medication abortion in the U.S. is mifepristone and misoprostol.”

Abortion medication is approved by the FDA to terminate pregnancies until the 10-week gestation point and is less likely than either Tylenol or Viagra to send people to the emergency room.

Still, state restrictions and finances can make such treatments feel out of reach. Nineteen states require that a doctor be physically present when a patient takes the abortion pill, ruling out telemedicine or other more accessible options for care. And as some states issue more and more restrictions and bans against abortion, and others see an increase in patients from other states, a dwindling number of available appointments may drive pregnant people to seek alternatives.

While abortion seekers can find support from digital resources such as Plan C and ineedana.com, there are ways in which their online search histories may implicate them, as the American Civil Liberties Union has highlighted.

The National Advocates for Pregnant Women, an abortion-rights group, says it has chronicled over 1,700 cases in which people were charged in relation to a pregnancy outcome between 1973 and 2020. Those targeted by the charges, which can result in fines and criminal records, are disproportionately people of color, according to obstetrician and gynecologist Verma.

Because of these risks, it is “essential that clinicians understand how to protect patient privacy and confidentiality when caring for a patient who is self-managing or has self-managed an abortion,” Verma said.

An added concern among doctors is that abortion restrictions will create a chilling effect for people seeking medical help. The fact that some aren’t able to access the care they need reveals a larger problem with the health care system, according  to emergency doctor Trebach.

“It is much, much easier to go to TikTok or Facebook or Twitter than it is to make an appointment with your primary doctor seven weeks from now,” he said. “Things need to get better and things need to change.”