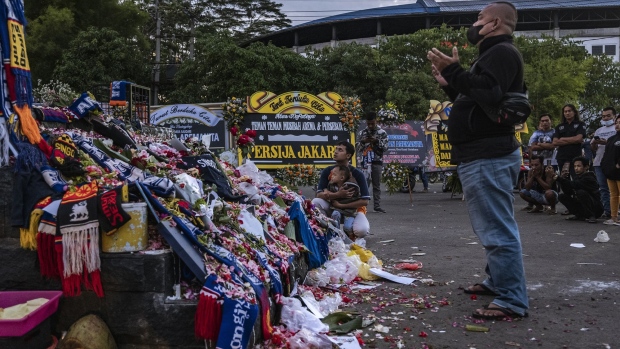 (Bloomberg) -- A deadly stampede at an Indonesian soccer match triggered by police firing tear gas has added pressure on President Joko Widodo to overhaul a security force often criticized for brutality and corruption.

The tragedy over the weekend left 125 people dead and is one of the world’s worst stadium disasters. It was also the first time Indonesian police used tear gas to break up a riot among team supporters in east Java -- an action that international soccer governing body FIFA prohibits.

The police defended their actions saying the fighting threatened the safety of their officers and spectators. But it triggered an outpouring of criticism on social media -- including flooding the Twitter page of the police public relations division -- calling for resignations of the top cops as well as those on the ground involved in the incident.

“Public dissatisfaction with the police is growing, especially when it’s seen as being heavy-handed toward the poor and not discharging their duties fairly,” said Bambang Harymurti, the former editor-in-chief of local news outlet Tempo who has been writing about Indonesian politics for four decades.

“The police’s actions could spur calls for reforms. And Jokowi’s standing can get better if he takes a firmer stand and look into the police’s excessive use of force,” he added.

Jokowi -- as the president is popularly known -- took a hit in opinion polls after his recent move to hike fuel prices at a time when inflation is at a seven-year high sent thousands onto the streets to protest. Though he still enjoys widespread support, he is coming under pressure to reform the police.

The president, whose office controls the police force, has since ordered the football league to suspend matches until investigations are completed and security procedures are improved. His government has arranged for an independent task force to look into the incident and the findings could be completed within two to three weeks.

A district police chief and nine brigade commanders have since been dismissed.

“We asked the police to unveil who has perpetrated the crimes and that action must be taken against them,” Coordinating Political, Legal and Security Affairs Minister Mahfud MD said at a briefing on Tuesday. “We also hope the National Police will evaluate their security procedures.”

Analysts have said moving the police force under a separate ministry could allow for more checks and balances to supervise their powers.

“Reforming the police requires strong political will from the President and from within the police itself,” said D. Nicky Fahrizal, a researcher at the Jakarta-based Centre for Strategic and International Studies. “Which aspect should be reformed? It should be their cultural practices, changing the profile of officers in charge and the mindset.”

In the last two years, the number of incidents involving police brutality has gone up to 677 incidents from 651, according to Indonesia-based Commission for Missing Persons and Victims of Violence, or Kontras. More broadly, Indonesia was ranked 96 out of 180 countries surveyed on corruption in a 2021 Transparency International report, behind countries like Brazil and Tanzania.

The latest incident comes not long after the police head of internal affairs was fired when he was charged for the murder of a junior cop due to an alleged affair involving his wife. It triggered a public backlash, with accusations of a cover-up that prompted Jokowi to weigh in to call for transparent investigations.

Back in 2016, Jokowi had said that a “comprehensive reform in the Indonesian police is the key to facing the future”. He also urged the police to produce officers who are trusted by the public. But even with the recent incidents involving the force, Jokowi has largely sidestepped calls for reforms.

Reforming the police can be challenging given that the police leadership has strong ties with political parties as well as various groups, said Kontras’ coordinator Fatia Maulidiyanti. The current president of the Football Association of Indonesia, Mochamad Iriawan, for instance is a police general.

“If previously, the military generals are the ones holding high-ranking positions, the police generals are now the ones in charge,” Harymurti said.