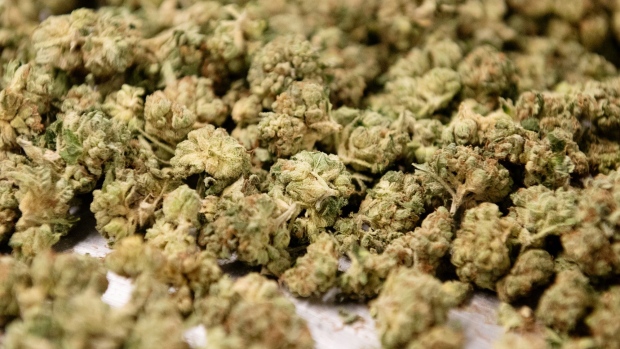 Finished buds sit in a tray at the CannTrust Holdings Inc. cannabis production facility in Fenwick, Ontario, Canada, on Monday, Oct. 15, 2018. Canada, which has allowed medical marijuana for almost two decades, legalizes the drug for recreational use on Oct. 17, joining Uruguay as one of two countries without restrictions on pot and putting the country at the forefront of what could be a $150 billion-plus global market when others follow. Photographer: Galit Rodan/Bloomberg , Bloomberg

(Bloomberg) -- New York is ready to legalize recreational marijuana. The state would impose special pot taxes and prepare to license dispensaries under an agreement reached by Gov. Andrew Cuomo and legislative leaders.

“It is my understanding that the three-way agreement has been reached and that bill drafting is in the process of finishing a bill that we all have said we support,” state Senate Finance Committee Chair Liz Krueger told Bloomberg Government on Wednesday.

Cannabis use would become legal for adults 21 years old and up.

The deal that legislative leaders brokered with Cuomo (D) calls for a 13% sales tax, 9% of which would go to the state and 4% to the localities, Krueger said. Distributors additionally would collect an excise tax of as much as 3 cents per milligram of THC, the active ingredient in cannabis, with a sliding scale based on the type of product and its potency.

The governor’s office estimates that a legal cannabis program could pull in about $350 million a year once fully implemented.

Cuomo earlier Wednesday said they were close to an agreement legalizing marijuana, and that it’s one of his budget priorities. Krueger said she expects lawmakers to vote on the measure as soon as next week, outside of the budget.