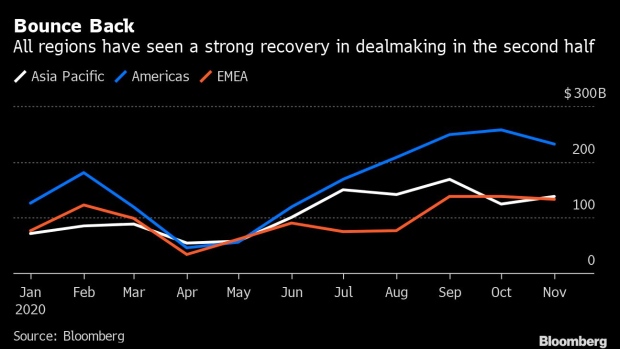 (Bloomberg) -- Dealmakers are on track to end 2020 with a flourish, having recovered much of the ground lost to the coronavirus pandemic earlier in the year.

Companies have announced $760 billion of acquisitions so far in the fourth quarter, the highest for this point in the period since 2016, according to data compiled by Bloomberg. November has been the busiest month of the year so far by number of deals, the data show.

The tally got a boost Monday with financial data giant S&P Global Inc.’s takeover of IHS Markit Ltd. for about $39 billion in stock, the year’s second-biggest transaction.

The latest series of megadeals, added to the record third-quarter haul of $993 billion, is helping volumes recover after the Covid-19 crisis triggered a steep decline in the first half of the year. The value of M&A announced this year is now down just 13%, compared with the 42% decline through the end of June.

Most of this year’s biggest deals have come in the past few months, including Advanced Micro Devices Inc.’s $35 billion takeover of chipmaker Xilinx Inc. agreed in October. Other major transactions announced recently include billionaire Li Ka-shing’s sale of his European wireless towers to Cellnex Telecom SA for about 10 billion euros ($12 billion) and the 7.2 billion-pound ($9.6 billion) purchase of blue-chip British insurer RSA Insurance Group Plc.

More large deals could be on the cards before 2020 is out. Salesforce.com Inc. could announce the acquisition of workplace chat tool Slack Technologies Inc., which has a market value of $23 billion, as soon as this week, according to a person familiar with the matter. Meanwhile, private equity firms continue to look for ways to spend $1.6 trillion of pent-up cash.