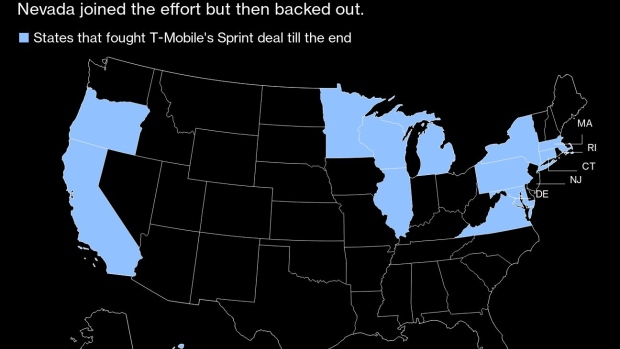 More than a dozen U.S. states sued to stop T-Mobile US Inc.’s takeover of Sprint Corp. and failed when a judge ruled against them this week. But their unusual effort to step in as de facto antitrust regulators in the era of a lax Trump administration — and the fact that the case was seen as such a close call — is sure to unnerve other dealmakers who may be contemplating their own controversial mergers and acquisitions.

The Department of Justice and the Federal Communications Commission are the main regulatory bodies that deal-hungry telecommunications CEOs must appease to get their transactions over the antitrust hurdle. (Other industries may have to answer to the Federal Trade Commission.) But the states have emerged as one more powerful group to worry about. In the T-Mobile-Sprint matter, state attorneys general from around the country, led by New York and California, demonstrated a willingness to go beyond the convention of securing one-off concessions for their own constituents when a deal raises concerns. Instead, if regulators drop the ball, the states are prepared to team up and take companies to court, with proceedings that could potentially stretch on for months — and time is money.

With the DOJ, FCC and now the states, it’s become “a three-headed monster,” said John Stephens, AT&T Inc.’s chief financial officer. “Or maybe a 52-headed monster, I should say,” he added, speaking during a post-earnings phone interview on Jan. 29, before the Sprint ruling.

District Judge Victor Marrero ultimately ruled in favor of the wireless carriers this week, rejecting the states’ arguments that the merger will lead to higher prices for consumers and that wireless newbie Dish Network Corp. won’t become a viable competitor capable of replacing Sprint. The deal, which the companies expect to close by April, will shrink the number of U.S. national wireless carriers from four to three, a level of market concentration that was taboo under previous administrations.

On the one hand, the ruling has the potential to open the floodgates for other megamergers that traditionally would have been considered off-limits. To use a hypohetical, take Dish and AT&T’s DirecTV: They compete in providing satellite-TV service to U.S. households, and both parties have said in the past that there would, in theory, be benefits to putting the businesses together, if not for the regulatory hurdles. (AT&T executives have since said they aren’t planning to sell DirecTV.) But just as T-Mobile and Sprint successfully argued that their industry is different now thanks to changing technologies, satellite providers could make that claim, too.

Even so, the states’ persistence in the Sprint matter may make some would-be dealmakers think twice about how far they’re willing to go to get a transaction across the finish line. Keeping with the Dish-DirecTV example, those are precisely the kinds of well-known brands that the states could go after in a merger fight. And if it weren’t for the states, T-Mobile and Sprint would have had the major regulatory approvals they needed wrapped up months ago; FCC Chairman Ajit Pai gave his blessing back in May, and the Justice Department cleared the deal in July. As the battle with the states dragged on, Sprint’s market value shrank, its business deteriorated, and now T-Mobile wants to renegotiate the price it pays Sprint’s shareholders.

In a bit of irony, the Federal Trade Commission said Tuesday that it’s looking into whether past purchases by U.S. technology giants such as Amazon.com Inc., Google and Facebook Inc. that slipped by regulators’ radars were, in fact, anticompetitive. The FTC’s announcement — part of the ongoing scrutiny of the power wielded by Big Tech — came hours after the ruling for T-Mobile’s acquisition of Sprint, one of the most anticompetitive megadeals in the tech sphere.

Letitia James, the New York attorney general who led the T-Mobile-Sprint opposition, said in response to Tuesday’s court decision that while she disagrees with the outcome, the states “will continue to fight the kind of consumer-harming megamergers our antitrust laws were designed to prevent.” Think she means it?