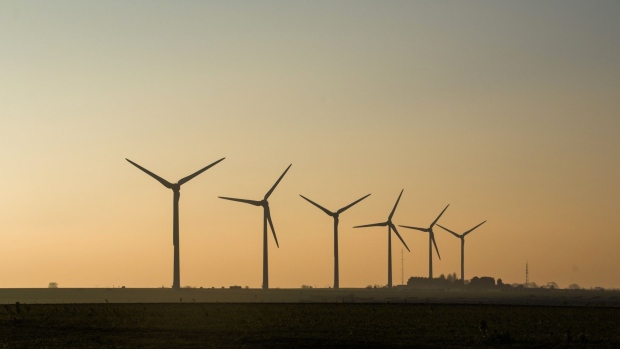 Wind turbines in a field in the Seine-Maritime department of Normandy, France, on Monday, Jan. 24, 2022. France, located at the heart of Western Europe's power grid, with its fleet of nuclear reactors has for decades been the continent's largest electricity exporter, supplying the U.K., Spain, Italy, Switzerland, Belgium and Germany at times of peak demand. Photographer: Nathan Laine/Bloomberg , Bloomberg

(Bloomberg) -- Former prime ministers Liz Truss and Boris Johnson joined a parliamentary rebellion aiming to overturn Britain’s effective ban on onshore wind farms, adding a fresh headache for the current premier. On a calm day for earnings, deals are in focus in the city as SSE agrees to sell a minority stake in its electricity transmission network business and Devro is set to be acquired.

Here’s the key business news from London-listed companies this morning:

SSE Plc: The energy company agreed to sell a 25% stake in its electricity transmission grid to the Ontario Teachers’ Pension Plan Board for about £1.5 billion, with the transition expected to complete shortly.

Devro Plc: Saria Nederland is offering 316.1p in cash for Devro in an agreed deal that values the company at about £540 million on a fully diluted basis, according to a filing. The acquisition is subject to the approval of shareholders, who would be entitled to receive and retain a cash dividend.

Breedon Group Plc: The construction materials firm expects to deliver results in line with its prior guidance as its end-markets remain resilient.

Political pressure is mounting on Prime Minister Rishi Sunak, who was asked by senior civil servants to delay his planned “bonfire” of some 4,000 EU laws from British statute books by several years, threatening an uneasy relationship with his party’s Brexiteer right wing.

Chancellor of the Exchequer Jeremy Hunt argued in an interview with Sky News that the government’s intended regulatory reforms for business could actually make post-Brexit Britain richer, contesting the UK fiscal watchdog’s projection that the exit from the European Union will reduce the size of the economy.

Former prime ministers Liz Truss and Boris Johnson signed an amendment to the government’s Levelling Up legislation brought by Tory MP Simon Clarke -- who served in Truss’s cabinet -- which would ease current restrictions on onshore wind. It’s their first public act of dissent against Sunak’s government.

Nurses in England, Wales and Northern Ireland will strike on Dec. 15 and 20, the first time the profession has staged nationwide industrial action, amid a dispute over pay, the Royal College of Nursing announced on Friday.

It's decision day for shareholders of industrial software maker Aveva Group Plc. They're scheduled to vote on Schneider Electric SE’s £32.25-a-share takeover offer, which some key investors have openly rebuffed as opportunistic after a rout in technology stocks this year. The bid will require the backing of at least 75% of minority shareholders to pass.

Next week, investors will be closely watching Nationwide Building Society’s latest UK housing market data after surging mortgage rates in October drove the largest monthly drop in house prices since the start of the pandemic.

--With assistance from Leonard Kehnscherper.