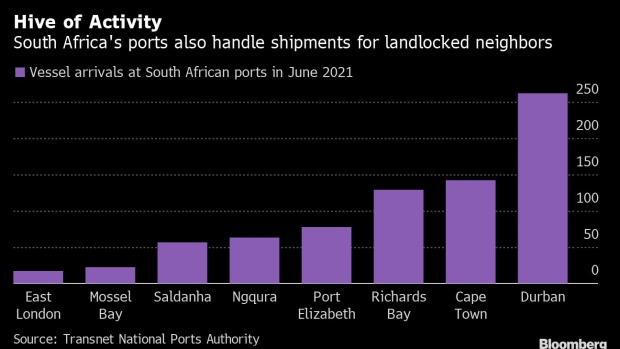 South Africa’s port and rail company appears to have been targeted with a strain of ransomware that cybersecurity experts have linked to a series of high-profile data breaches likely carried out by crime gangs from Eastern Europe and Russia.

The hackers left a ransom note on Transnet SOC Ltd.’s computers, seen by Bloomberg News, claiming they encrypted the company’s files, including a terabyte of personal data, financial reports and other documents. The note instructed the firm to visit a chat portal on the dark web to enter negotiations.

The cyberattack on July 22 caused the company to declare force majeure at container terminals and switch to manual processing of cargo. Transnet’s Durban port alone handles more than half of the nation’s shipments and is the main gateway for other commodity exporters including the Democratic Republic of Congo and Zambia. The disruption follows deadly protests in South Africa earlier this month that also interrupted operations.

The Transnet ransom note was similar to others seen in recent months, according to cybersecurity firm Crowdstrike Holdings Inc. It is linked to ransomware strains known variously as “Death Kitty,” “Hello Kitty” and “Five Hands,” said Adam Meyers, vice president of intelligence at Crowdstrike. Those strains have been observed this year targeting Polish video game maker CD Projekt and exploiting security vulnerabilities in SonicWall products.

Many organizations still don’t have a robust cybersecurity risk management policy, and that means “industries like logistics and critical infrastructure are vulnerable to attack,” said Lisa Donnan, a partner at cyber investment group Option3Ventures. There’s also a global shortage of cybersecurity workers as incidents are increasing along with the average ransom price rising to $200,000 from $5,000 in 2018, she said.

Transnet made for a “ripe target” because its ports are critical to the country and the broader region, Donnan said in an emailed response to questions. “Unfortunately, many organizations find out after an attack that cybersecurity is a business issue not an IT issue,” she said.

The location and identity of the Transnet hackers is unclear. Meyers said they were likely of Eastern European or Russian origin, where many ransomware groups are based.

Some advertise their exploits online and use forums on the dark web to hire hackers to work with them, but the gang associated with “Death Kitty” and its variants have kept a lower profile, according to Meyers. “We have not observed any recruitment or selling of anything consistent with this ransomware, so it is either a closed group or a private service that doesn’t advertise.”

Transnet has fully restored operations at the nation’s ports after reinstating its automated terminal-operating system. Other systems are being brought up in a staggered manner, Gordhan said.