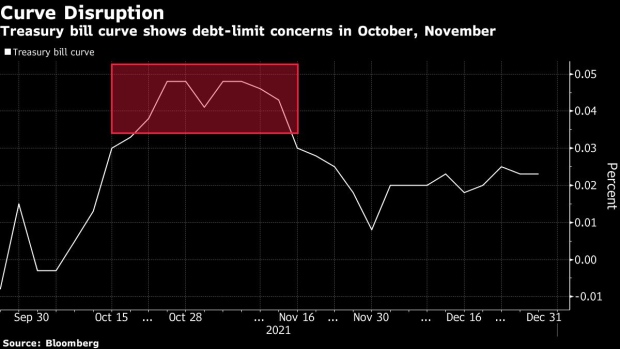 (Bloomberg) -- Wall Street is making sure that the world’s biggest bond market will still be able to function in the worst-case scenario of the U.S. Treasury being forced to delay payments on its securities in the coming weeks.

Treasury Secretary Janet Yellen has repeatedly warned that sometime in October her department will exhaust the measures she’s used to stay under the cap on the nation’s borrowing authority, which was reinstated in August. While lawmakers have pledged that the debt limit will be raised or suspended, there’s no clear plan yet for Congress to act.

The partisan battle over the debt limit has participants in the $22 trillion Treasuries market wargaming a scenario that the Treasury insists is not an option: where a failure by Congress to act in time leads the government to delay payments on some Treasuries until things are resolved.

The Securities Industry and Financial Markets Association has dusted off previous plans to handle such disruptions. The bond market’s pre-eminent trade group has worked out ways to handle trading, clearing and settlement of affected securities.

“Given what is going on, just to be prepared in case the unthinkable were to happen, we are checking in with our members and are looking at our playbooks for how the Treasury market would process a delay in payments,” said Robert Toomey, managing director and associate general counsel of Sifma.

If there was “an impact on the Treasury market from a delayed payment, as far as to pricing, volatility or perhaps even creating two tiers of Treasuries -- those that are in arrears and those that are not -- it could risk going through many financial-market channels.”

At a money-fund industry conference this week, the debt ceiling came up as an issue that fund managers will have to contend with in the coming weeks, said Debbie Cunningham, who oversees about $430 billion of money funds as chief investment officer of global liquidity markets at Federated Hermes.

“Basically it was a secondary topic because the conclusion was we’ve been dealing with this on a negotiated basis since the early 2000s,” she said. It’s an “issue that gets resolved eventually, and perhaps there might be a buying opportunity depending on what your risk tolerance might be.”

Investors are shying away from Treasury bills due in late October and early November, which are deemed at risk of delayed payment. But the pricing disparity isn’t as large as seen during the 2013 debt-limit impasse: At about 2 basis points, it’s roughly a tenth of what it was then.

One complication has been the Treasury’s difficulty in forecasting what’s known as the “x-date,” when the government would default if the limit isn’t hoisted. The pandemic has made it harder to predict certain spending and revenue flows.

Strategists at Barclays Plc and Wrightson ICAP see the drop-dead date around the end of October, while those at Bank of America Corp. and Jefferies say it’s in November.

While congressional Democratic leaders have sought to force Republicans into a bipartisan vote to suspend the debt ceiling, GOP intransigence has seen some Democratic lawmakers suggest their party will act on its own. Democratic Senator Tim Kaine of Virginia said Thursday that Democratic leadership is exploring alternatives. “I’m not going to let the government default,” he said.

But for those in the trenches of the market for Treasuries -- the benchmark for borrowing by governments and corporations worldwide -- preparing for the worst-case scenario is crucial.

The ability of securities with delayed payments to move seamlessly through the Fedwire Securities Service is key. Sifma’s Toomey said that would require that the Treasury give ample notice on which debt instruments would be involved. Fedwire is an electronic system maintained by the Federal Reserve that processes transfers and settlement services for Treasuries daily.

The assumption is that the Treasury would give at least a day’s warning, which Sifma says would enable coordination with member firms to manually change maturity dates for securities. The Depository Trust & Clearing Corp.’s Fixed Income Clearing Corporation -- the only central clearinghouse for Treasuries and repurchase agreements -- has modeled scenarios to continue the flow of transactions based on Sifma’s playbook.

“The Fedwire Securities Service has the capability to delay a principal and/or interest payment if necessary or if requested to do so in advance by the issuer,” the TMPG’s 2013 document said. TPMG also said, “Market participants should recognize that how the Fedwire Securities Service will treat a delayed payment would be determined by the Treasury.”

The New York Fed declined to comment beyond what was in the TMPG paper.

Payment delays may be manageable from a technical standpoint. But the likely damage to investor confidence in Treasuries is something the government can ill afford as it finances massive budget deficits.

“If we get to the drop-dead date and a payment is missed, that is a technical default -- there is really no other way to soften that,” said Michael de Pass, global head of U.S. Treasury trading at Citadel Securities. Paul Hamill, the firm’s head of global fixed income, currencies and commodities distribution, is a TMPG member.

“The reality is that there’s a bond that has been priced on some cashflow assumptions -- and it’s missing that cash flow -- that’s it,” he said. “The payment would clearly occur at some point, but the uncertainty created as a result of that potentially would be tremendous.”