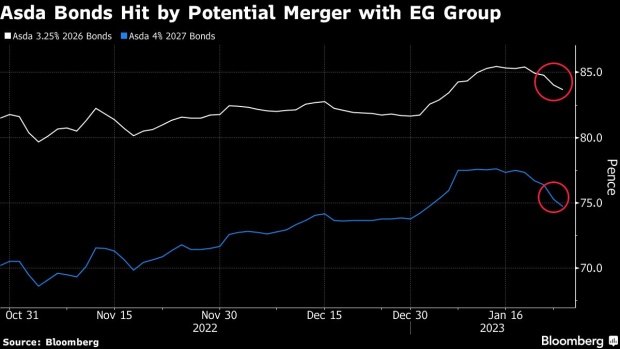 (Bloomberg) -- Holders of bonds issued by supermarket group Asda are demanding more details about a mooted takeover of EG Group Ltd.’s UK petrol operations, a deal that would saddle the grocer with more debt and could lead to ratings downgrades.

The potential transaction came as a negative surprise when it was reported on Sunday, according to multiple bondholders, who asked not to be identified as they weren’t authorized to speak publicly.

Bonds issued by the British grocer have fallen as much as 1.4 pence on the pound since then, according to CBBT pricing compiled by Bloomberg.

EG Group, a convenience retailer with more than 6,300 sites in 10 countries, is heavily exposed to rising interest rates as the cheap money era comes to an end because two-thirds of its $10.2 billion debt is at floating rates. Aggressive rate rises by the Federal Reserve have also upended demand for credit issued by highly-leveraged firms as investors worry about a possible recession.

The firm is looking to offload the UK unit at a time when the wider petrol business is likely to see materially lower sales volumes, Fitch Ratings said in October. That contributed to the ratings company’s decision to slash its profit forecast for the group from 2022 through 2024 by 25%.

Representatives of both EG Group and Asda declined to comment.

Brothers Mohsin and Zuber Issa, together with private equity firm TDR Capital, own both firms and considered a wider combination of the two companies two years ago. They’re again dusting down plans for a merger, which could be structured as an Asda Group Ltd takeover, but this time limiting it to the UK gas station business, The Sunday Times reported on Jan. 21.

The common shareholders of the companies could allow them to avoid triggering a change in the ownership clause in the bond documents, which would typically allow the bond investors to be repaid in full, said some of the people familiar. The notes of both companies trade at a heavy discount to the issue price.

EG’s bondholders would benefit from the combination as Asda has less leverage, is better rated and its debt matures much later. By contrast, the convenience retailer has about $8.5 billion of debt maturing in 2025 alone, Fitch Ratings said in the October report.

If the supermarket group hypothetically raised £2.5 billion of debt to acquire the petrol stations, “Asda’s leverage would go up, putting further negative pressure on the rating,” said Roberto Pozzi, an analyst at Moody’s Investors Service.

While Asda’s debt is more manageable than that of EG, its bonds have been hit hard in recent months after investors turned negative on junk-rated companies and in particular on the UK market.

Still, the retailer has held onto its market share over the last six months despite increased competition from discounters and had a strong performance at Christmas.

The company’s 2026 sterling bonds are quoted at 84 pence, down 10 pence on the pound compared with a year ago. The 2027 bonds have also fallen.

EG Group is contemplating other options for debt reduction including cutting investment, disposing of non-strategic assets and selling part of its $10 billion real-estate portfolio, Bloomberg News reported in November.

It’s not the first time that Asda’s owners have contemplated loading up the grocer with more debt. When the Issa brothers were considering making a bid for pharmacy group Boots last year, they discussed adding as much as £4.5 billion to the grocer’s debt to help fund the transaction. The Boots sale process was eventually halted when market conditions worsened.