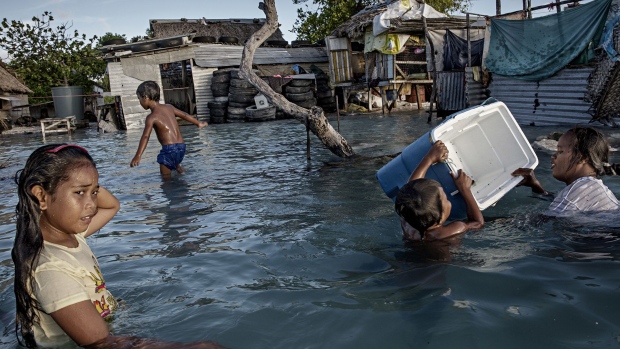 (Bloomberg) -- Debt restructurings tied to nature or climate-friendly outcomes present a multi-billion-dollar possibility, according to one of the world’s largest conservation organizations that’s been involved in three such deals.

“We see $10 billion right now of opportunity that can turn $2 billion into conservation, with not one penny of new philanthropy coming from the private sector,” said Jennifer Morris, chief executive of the US nonprofit Nature Conservancy, during a panel discussion held Monday at the COP27 climate summit. “The opportunity for conservation here is huge.”Debt-for-nature or climate swaps are deals that typically allow a country to restructure its debt at a lower interest rate or longer maturity, with the proceeds being allocated to conservation or green projects. Since 2016, the Nature Conservancy has organized debt-for-nature swaps for the Seychelles, Belize and Barbados, which overall helped to convert more than $500 million of debt into $230 million of money for conservation, according to Morris.

The swaps are still a niche business, mainly because of high transaction costs, the need to monitor conservation or climate projects, and the requirement that a debtor country makes a long-term financial commitment. What’s also noteworthy is that China, the world’s largest bilateral creditor, has yet to embark on such deals in a substantial way.But there’s growing interest from the developing world. Gabon signaled its plans last month for a $700 million debt swap to fund marine conservation in what may be the biggest transaction yet. Cabo Verde, an island country in the Atlantic ocean, also is in negotiations about a potential deal. Gambia’s environment minister expressed that country’s support for such financing at COP27, and her comments follow similar statements from Sri Lanka, Colombia, Pakistan, Eswatini and Kenya. In August, Colombia President Gustavo Petro proposed a debt-for-nature swap to protect the Amazon rainforest, while Argentina said last year that it was willing to link part of its debt payments to investments in green infrastructure.

While the instruments have been around for decades, their appeal has grown following the deals arranged by Nature Conservancy and the recent debt crises for developing nations caused by the Covid-19 pandemic, fallout from Russia’s war in Ukraine and rising interest rates. Fifty-eight of the world’s developing countries most vulnerable to climate change collectively have  almost half a trillion of debt servicing payments due in the next four years.

“This huge debt service payment could obstruct opportunities to invest in adaptation or the low-carbon transition,” said Sara Jane Ahmed, finance adviser to the Vulnerable Twenty Group, a coalition representing those 58 countries, in an interview. Debt swaps must scale, Ahmed added. “We’re just not in a situation where we can have austerity because we need to invest out of the pandemic and invest out of climate impacts.”

Countries that are especially vulnerable to climate change face a “triple whammy” from the need to spend more to improve resilience and reconstruction, while simultaneously facing higher borrowing costs, Kristina Kostial, deputy director of the strategy policy and review department at the International Monetary Fund, told the COP27 panel.

Climate or nature-related swaps might help break that cycle as they “offer developing countries, with little fiscal space, the opportunity to undertake urgently needed climate investments,” Kostial said. Carbon credits could feature as part of the swaps, she added.

Investment from the private sector is key to any restructuring, Ahmed said. Credit Suisse Group AG, for example, took a lead role in the Belize and Barbados deals. Deutsche Bank AG is “hugely excited” by these instruments, said Claire Coustar, the company’s global head of ESG and sustainable finance, during the panel discussion. For developing countries, the swap structure offers a way to service their at a better interest rate, she said.

(Corrects name of IMF official in the ninth and 10th paragraphs in story originally published Nov. 7.)