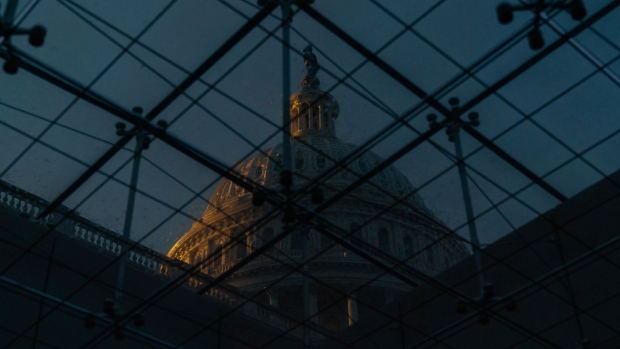 The US Capitol at sunset in Washington, DC, US, on Wednesday, Jan. 4, 2023. House GOP leader Kevin McCarthy suffered yet another stunning blow at the hands of a group of Republican dissidents, who blocked him from becoming speaker in a sixth round of voting and turned the first days of the party's control of the chamber into a scene of chaos and dysfunction. Photographer: Eric Lee/Bloomberg , Bloomberg

(Bloomberg) -- The three most-cited debt-rating firms are all expecting Congress ultimately to raise the federal debt ceiling — despite a deep partisan divide — though they’re split on the implications of any move to prioritize payments on Treasuries in the event the debate goes into extra time.

Moody’s Investors Service, S&P Global Ratings and Fitch Ratings are all game-planning ahead of the time later this year when the Treasury Department will run out of cash if lawmakers don’t boost the ceiling. Economists and Wall Street analysts see that happening sometime in the third quarter, after the Treasury last week started accounting maneuvers to avoid breaching the ceiling.

What the agencies do could play a major role in financial-market reaction, given the example of the debt-limit fight of 2011, when S&P cut the sovereign US rating from AAA for the first time. The move spurred a selloff in risk assets like equities around the world, as well as incurring the wrath of the then-Treasury Secretary Timothy Geithner.

Moody’s and Fitch still have the US with the top grade.

But Fitch says the AAA rating would be at risk if the Treasury, at the “X-date” when it runs out of fiscal space, decided to make good on some federal obligations, including government bonds, but not others — like payments to certain contractors. Moody’s disagrees, while S&P says it depends on the context at the time.

“If for whatever reason they get beyond the X-date and stop paying obligations – whatever they are – that would not be consistent with a AAA rating,” Richard Francis, senior director at Fitch Ratings, said in an interview. “And if they miss a principal or interest payment, that would be a default.”

While the Treasury under current Secretary Janet Yellen has rejected the idea of prioritizing some payments over others as unworkable, many market participants assume the department would still put servicing Treasuries ahead of other items, given the vital role of the $24 trillion market in the global financial system.

Read More: Yellen Warns of Recession as Inevitable If US Defaults on Debt

Each of the three ratings agencies anticipates a deal to boost or suspend the debt ceiling. But they also see prioritization as being in the Treasury’s potential playbook. That’s after once-secret debt-limit contingency plans during the Obama administration back in 2011 became public years later, thanks to transcripts of conference calls released by the Federal Reserve.

“If they had to go to prioritizing, we’d continue to focus on the debt payments themselves — on principal and interest,” William Foster, a senior credit officer at Moody’s, said in an interview. “If a payment was missed, that would be a default. But other payments that aren’t related to debt service — if you prioritized those and delayed others – that would be separate and not what we’d be focused on in terms of a credit event.”

As for S&P, Joydeep Mukherji, a managing director at the company, said in an interview that “in theory” a rating could be adjusted in the case of payment prioritization, “if there were other reasons to think that rating should be lowered.”

“That’s a hard thing to talk about because we’ve never been there before,” he said. Mukherji added that “we don’t know at all that prioritization will happen or not — because the only person who could answer the question is the US Treasury.”

Mukherji drew a distinction between a default on Treasury securities versus failing to make other types of federal payments.

As for something like late payments to Social Security beneficiaries or a notary contractor, “those might be bad things in general, and they might give me indications of other problems that the government can’t pay the bills on time. But that’s not an event of default,” he said.

Yellen hasn’t yet specified to Congress when the estimated X-date is, for now only stating that it’s unlikely the extraordinary measures would be exhausted before early June.

Republicans, who control the House, are demanding spending cuts in return for raising the ceiling. But President Joe Biden and congressional Democrats reject that, demanding a “clean” increase or suspension, as has been done multiple times in recent years.

“Right now our base case is that in the end they are going to come to some kind of an agreement,” said Francis at Fitch.

Foster at Moody’s said that any halt of payments would trigger political blowback and “put the government in a challenging position.” His base case is that Congress finds a way to make a deal, though it will come very late or in an incremental fashion and not before it sparks financial market volatility, including sending risky assets like stocks lower.

“All the people we talk to are telling us that this is going to be a more complicated situation” than during past debt-limit episodes, said S&P’s Mukherji. “We say yes, it will” get resolved, but how it’s done is uncertain, he said.

(Updates with additional comment in paragraph before ‘X-Date’ subheadline.)