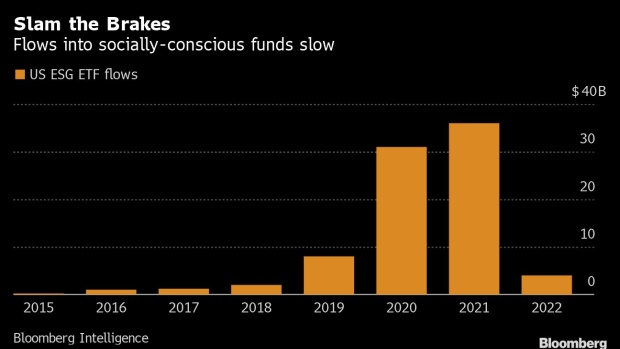 (Bloomberg) -- Almost three decades after coining the term “exchange-traded fund,” Morgan Stanley is finally set to enter the $6.9 trillion ETF arena with its own products.

The James Gorman-led bank applied for four socially conscious funds on Tuesday tracking US and international equities, according to a Tuesday filing with US regulators. The filing lands months after Morgan Stanley revealed plans to create a dedicated ETF platform in an internal memo.

The planned launches from Morgan Stanley are the latest in a series of investment giants caving to the ETF industry, with the likes of Capital Group and Neuberger Berman Group LLC taking the plunge in recent months. Given that the bank’s asset management arm oversees $1.4 trillion, Morgan Stanley’s moves will make a particular splash, according to Bloomberg Intelligence.

“There’s a new issuer every month, practically, but Morgan Stanley is a beast of a company,” said BI’s senior ETF analyst Eric Balchunas. “Anything they do in this space will be interesting and notable.”

Tickers and fees for the funds were not yet listed. A Morgan Stanley spokesperson declined to comment on the filings, citing regulatory rules.

While the potential funds would be the first modern-day ETFs for Morgan Stanley, the firm has a long history with the industry. The bank was home to some of the world’s first ETFs in the 1990s, and was where Bob Tull, then a vice president at the bank, and a team of lawyers came up with the term “exchange-traded fund.”

The bank’s influence on the industry didn’t stop there. In 1996, Morgan Stanley was granted regulatory approval to launch 17 ETFs known as World Equity Benchmarks (WEBS), with Barclays Plc as the fund manager. Barclays later bought WEBS and rebranded the products as “iShares,” and the business was sold to BlackRock in 2009.

Thanks largely to iShares, BlackRock is now the biggest ETF issuer in the world -- underscoring the challenge for Morgan Stanley. There are now almost 3,000 U.S. funds, and while launches are booming, most assets reside with products that are more than five years old.

The applications land at a rocky moment for environmental, social and governance minded funds. The ESG category has raked in roughly $4.5 billion so far in 2022, a massive slowdown after two straight years of more than $30 billion in inflows a year, Bloomberg data show.

“I’m surprised they went the ESG route, just given how much the investment community has seemingly cooled on ESG prospects,” said Todd Sohn, an ETF strategist at Strategas Securities. “No doubt the team is talented, so I’m curious how much AUM these funds bring in the first few months.”