Rogers-Shaw merger would be a major blow to competition within Canada: Professor

It’s a deal that’s been talked about for decades in Toronto’s bank towers and country clubs: The Rogers and Shaw families should merge their giant cable companies.

That it finally happened now, after all these years, underscores just how daunting the financial challenge was for the sellers -- the Shaws -- as they sought to map out a plan for a huge investment in 5G services to reinvigorate their wireless business.

That financial obligation now falls squarely on Rogers Communications Inc., controlled by the Rogers clan, one of Canada’s wealthiest families. The Toronto-based firm not only will need to borrow money for spectrum and 5G investment but also to finance the US$16 billion takeover of Shaw Communications Inc., one of the largest in Canadian history.

The deal is a high-stakes wager that Rogers will be able to cut costs and pay down its borrowings quickly. The company plans to boost its debt load, rated three notches above junk by S&P Global Ratings at BBB+, to a level so high that weaker companies would be at risk of losing their investment-grade status if they did the same. 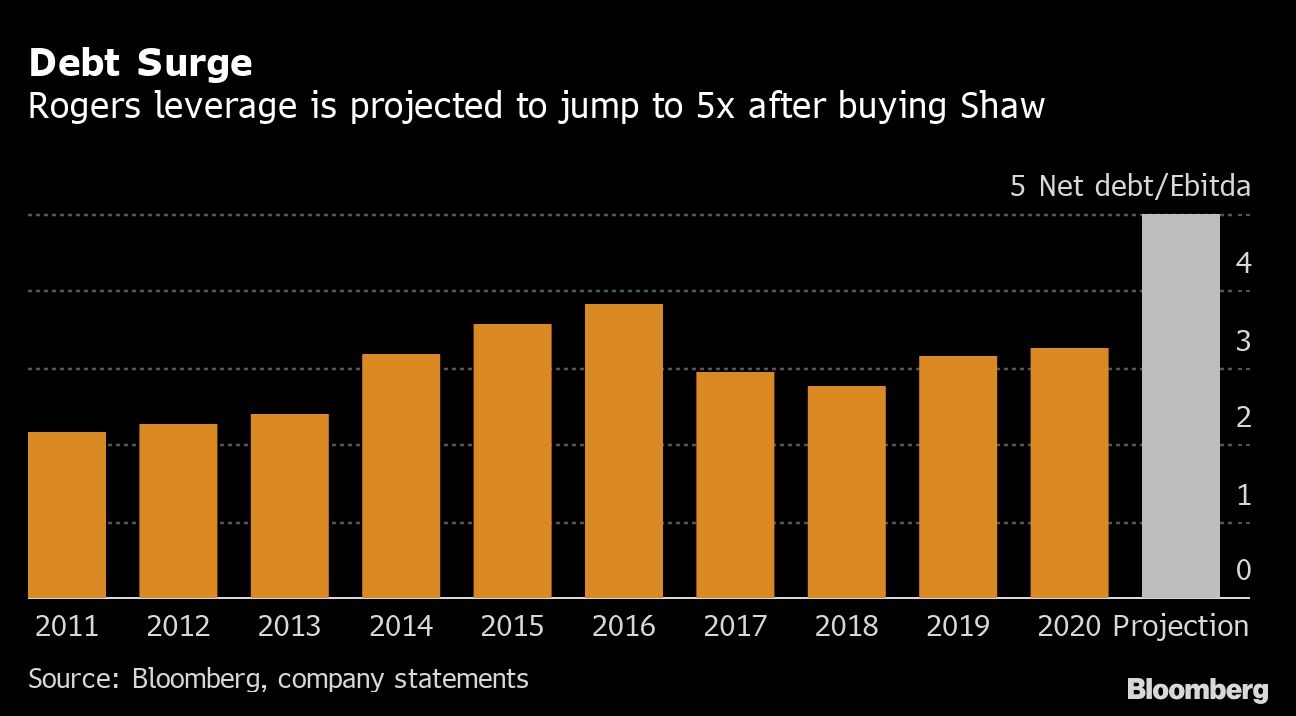 Bond traders immediately expressed their concern Monday, dumping Rogers’ long-term debt. But Rogers shares rose as the company promised the deal would add to earnings and cash flow per share as of the first year after closing, and that cost savings would top $1 billion annually within two years.

Rogers has lined up a $19 billion (US$15.2 billion) bridge loan with Bank of America Corp. to help fund the acquisition, according to people with knowledge of the matter.

Rogers has been down this path before of leveraging its balance sheet for major deals, including when founder Ted Rogers bought out AT&T Inc., then the company’s partner in the wireless business, in 2004.

An aggressive approach to deal-making made Rogers Communications the largest wireless player in Canada and has been key to building the family’s fortune. Their stake in the firm is worth more than $9.2 billion, according to data compiled by Bloomberg.

For the Shaw family, the deal is the conclusion of a process that saw the company examine all options for the future, including the possibility of going private, said Chief Executive Officer Bradley Shaw, the son of the company’s founder.

In the end, nothing beat a sale at a 69 per cent premium. The deal make the Shaws the second-largest shareholder of Rogers with more than $1.4 billion of equity.

“We always think we’re big enough, but you’re not,” Bradley Shaw said in an interview. “When you can accelerate investment -- which this merger does, and what it’s going to be able to do -- I think it’s really exciting.”

It’s still a long road to get the deal done. The transaction will be scrutinized by Canada’s competition watchdog and the communications industry regulator, and the final say goes to Justin Trudeau’s government. The reviews could take a year or longer. Rogers and Shaw said they expect to close in the first half of 2022.

The two companies’ cable and broadband operations don’t overlap much: Shaw dominates the west while Rogers is focused on Ontario and eastern parts of the country. But its wireless units do compete against each other, and the deal would reduce the number of major carriers to three in some markets, including Toronto.

That’s the toughest barrier for Rogers to overcome and will likely require changes to the deal, according to several analysts. The government could force the merged company to sell Shaw’s Freedom Mobile division, which has nearly 2 million customers, Cormark Securities analyst David McFadgen wrote in a note to investors.

While the three leading carriers in Canada each have more than 10 million retail wireless subscribers, we believe there may be some resistance to the deal from regulators after the nation’s prior push to establish a fourth major wireless carrier. This suggests that Rogers may have to make concessions to close the deal.

Rogers is making the case that scale is needed for 5G spending, especially across a vast country like Canada, and that data prices for consumers are falling and would continue to do so after the merger, CEO Joe Natale said.

“We’re at a critical inflection point in the future of our industry. We’re on the doorstep of 5G, and 5G is a big investment cycle that is critical to the future of Canada,” Natale said in an interview. “This is the next step in the long game.”

The combined company would spend $2.5 billion to build a 5G network in western Canada and $3 billion on investments in network, service and technology, the companies said in a statement. They pledged a $1 billion fund for high-speed Internet in rural, remote and Indigenous communities in the four western provinces.

Rogers’ western Canadian headquarters would be at Shaw’s current head office in Calgary, another detail intended to appease politicians and regulators.

Still, investors see enough risk that Shaw shares ended the day at $33.85 in Toronto, about 16 per cent below the $40.50 takeover price.

Canada is expected to start a 3500 MHz spectrum auction June 15, a key component in the expansion of 5G services. In the U.S., a rush by communication giants Verizon Communications Inc. and AT&T to buy 5G wireless airwaves has added billions of dollars to the corporate bond sales pipeline.

--With assistance from Ilya Banares.