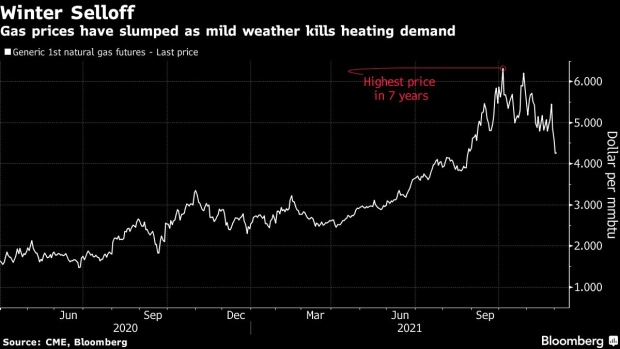 (Bloomberg) -- December began warm across the U.S. from the Rocky Mountains to New York, breaking records on the Great Plains and melting natural gas prices as the world struggles with energy shortages and rising inflation.

Temperatures are raging well above normal across much of the U.S., including New York where Thursday’s high could reach 60 degrees Fahrenheit (16 Celsius). Records fell in Denver as well as Bismark, North Dakota and Rapid City, South Dakota, as a wave of mild air swept away the seasonal chill.

While there may be a brief return to more seasonal temperatures in the northern U.S. next week, warmer air will dominate across the largest cities through the middle of the month. Temperatures could reach 5 degrees above normal across the eastern two-thirds of the country, including in New York, Chicago and Washington, and even higher across the South from Dec. 12-16.

December will likely be the third warmest going back to 1950 based on natural gas consumption, said Bradley Harvey, a meteorologist at commercial forecaster Maxar. Some of those mild trends may start to spill over into Europe and Asia as well.

“The European pattern should warm up in the middle third of the month,” Harvey said.

Atmospheric and Environmental Research updated its winter forecast earlier this week, calling for more mild conditions across the U.S. The outlook for warmer weather has killed bullish expectations that sent natural gas prices surging to the highest level in seven years in October. Traders were betting that inventories were too low to withstand a harsh winter. But warmer conditions have eroded heating demand, allowing producers to refill stockpiles to near normal levels.

Natural gas futures posted their biggest November loss in 20 years, with prices now down 30% from recent highs. The so-called “widowmaker” spread between March and April deliveries -- essentially a bet on how tight inventories will be at the end of the northern hemisphere’s winter -- has collapsed.

Still, despite predictions of a milder December, the coldest temperatures of the year in the Northern Hemisphere usually are in January. There have been past examples where winter started mild and ended with a bone-chilling sting across major metropolitan areas. One of the most stark examples was in Boston during the winter of 2014-15. The season started out mild, but in a six-week period the city set a new snowfall record as the cold set in.

This year’s weather patterns are keeping the world’s most frigid air bottled up in the Arctic. The polar vortex, the girdle of winds that corrals cold at Earth’s axis, has remained quite strong, allowing very little chill to seep down into temperate regions. The vortex’s grip should remain solid and that means the longer-range forecast for North America, Asia and Europe leans toward milder weather.

In addition, the Arctic Oscillation -- the pattern of high and low pressure over the pole -- has been in its positive phase, which favors keeping the cold to the north. This means most of the chillier weather for North America will be confined to the Pacific Northwest and western Canada, while the highly populated areas of the U.S. Midwest, Northeast, and South should remain mild.

Longer-term trends have seen December grow warmer through the decades. That’s especially true in the Midwest, where mean readings rose by 2 degrees in some places, according to new normal temperatures released this year based on 30-year averages. The latest set of figures use temperature and rain data gathered from 1991-2020.

Six of past Decembers since 2012 have ranked among the Top 10 hottest based on temperatures across the contiguous 48 states, according to the National Centers for Environmental Information. The trend shows up in heating degree days values as well. The figures are used to plot temperatures impact on energy demand.

The overall normal gas-weighted heating degree days value for the U.S. has been set at 838, which is 36 points lower than it was based on the 1981–2010 average, meaning the weather’s influence on December energy demand should have dropped. The December value will come in at 750, the third warmest since 1950, and below both the 30- and 10-year averages, according to Maxar predictions.

“The observation that December is losing some of its bite is certainly supported there with these new normals,” Harvey said.

(Adds weather in other U.S. regions. An earlier version corrected the temperature conversion.)