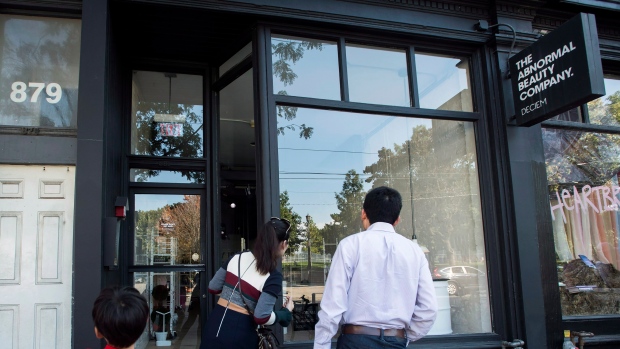 People react as they look outside the beauty supply store Deciem as it has closed all locations unexpectedly in Toronto on Tuesday, October 9, 2018. , THE CANADIAN PRESS/Nathan Denette

TORONTO -- Deciem stores that had been shuttered for several days reopened on Saturday, after the founder of the so-called "Abnormal Beauty Company" was ousted by an Ontario court ruling.

The stores were closed last week by decree of then-chief executive Brandon Truaxe, who announced on Instagram that all Deciem operations would be shutting down until further notice, alluding to allegations of criminal misconduct.

On Friday, he was removed from his post on an interim basis as a result of a court application from Estee Lauder Companies Inc., which holds a one-third stake in the business.

And while an Estee Lauder spokeswoman confirmed the stores had reopened, not everything about the brand had returned to normal.

The company Instagram account, once home to hundreds of what Estee Lauder described as "outrageous, disturbing, defamatory, and/or offensive posts," was taken down on Friday and had yet to be restored by Saturday afternoon.

Mark Gelowitz, a lawyer representing Estee Lauder, cited Truaxe's Instagram posts -- along with his decision to close the business -- as a reason for the court application, saying his behaviour led to numerous legal concerns from landlords, suppliers and employees.

Representatives from Deciem did not immediately respond to requests for comment.