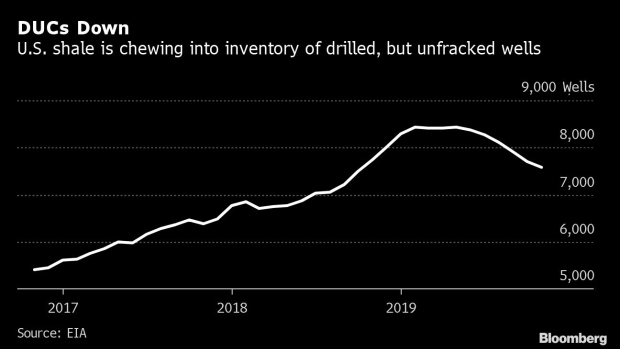 (Bloomberg) -- As the U.S. shale boom unfolded, the number of oil wells that were drilled but never opened for production steadily rose. Now, that figure has plunged by a surprising 10% in the newest sign yet of tough times for drillers.

A weighty decline in the so-called fracklog is perhaps the most salient gauge of a developing slowdown in U.S. shale. It shows that explorers are no longer racing to drill wells faster than they can complete them.

The drop adds to a growing body of evidence that shale explorers, pushed by investors to prioritize profits over production, are stepping on the brakes. That’s bad news for oilfield services companies that have depended on rising shale growth for their prosperity. When Halliburton Co., owner of the world’s biggest fleet of fracking pumps, reports on its fourth quarter on Jan. 21, analysts expect to see a 29% earnings decline from a year earlier, excluding certain items.

“We continue to believe 2020 will be a tale of two markets, with North America being a muddle while the recovery should continue in international and offshore arenas,” James West, an analyst at Evercore ISI, said Jan. 10 in a note to investors titled, “4Q Earnings Season Could Be Ugly.“

The number of drilled but uncompleted wells, known as DUCs, have generally increased since the end of 2016, with the rise largely attributable to factors that include lower-than-ideal pricing for oil and gas and limited pipeline capacity. But between May and November, the number fell to 7,574 from a high of 8,429, according to the most recent data from the U.S. Energy Information Administration.

That’s the steepest decline over the last three years. The key now for the biggest service providers may be how quickly they can pivot toward opportunities outside of shale.

Consider the case of Baker Hughes Co., which spun off its onshore fracking business three years ago. While Halliburton is expected to report a fourth-quarter decline, Baker Hughes is forecast to report adjusted earnings on Jan. 22 that are up 19% to 31 cents a share, according to analysts.

When Schlumberger Ltd., which already has a major focus outside the U.S., reports Friday, it’s expected to best last year’s fourth-quarter adjusted earnings by about a penny to 37 cents a share. The world’s biggest oilfield service company has said its North American land business, which includes pressure pumping, is now under strategic review and analysts say the company could announce an update to the unit on its earnings call.

“2019 was a brutal year for completions activity,” analysts at Tudor Pickering Holt & Co. wrote in a note earlier this month. “And the pressure pumpers sit in a deep hole that’ll likely take a while to dig out of absent a stout demand surprise.”

To contact the editors responsible for this story: Simon Casey at scasey4@bloomberg.net, Reg Gale