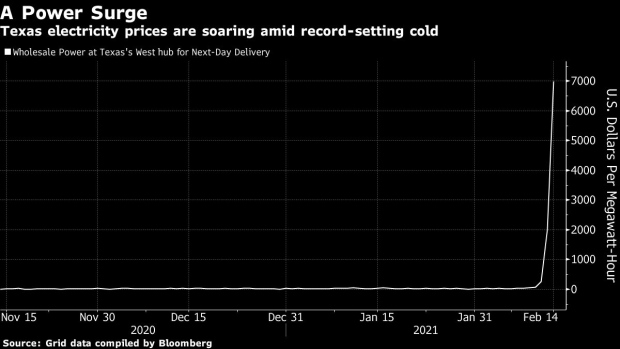 (Bloomberg) -- Natural gas traded at a record $600 per million British thermal units in Oklahoma over the long holiday weekend with a deep freeze across the central U.S. intensifying, according to traders.

Temperatures fell so far below forecasts in parts of the central and western U.S. that physical gas prices soared from California to the Rockies, with one hub in Cheyenne reaching as high as $350 per mmBtu, said the traders, asking not to be identified because the information isn’t public. The heating and power plant fuel traded for as much as $195 per mmBtu in Southern California.

If day-ahead electricity prices are any indication, the run-up in energy prices isn’t over.

Wholesale power for delivery Sunday was trading at anywhere from $3,000 to $7,000 a megawatt-hour in some places, triple the records set in some places Saturday and a staggering 2,672% increase from Friday at Texas’s West hub.

Traders on Saturday said they’ve never seen electricity trade on Texas’s grid for thousands of dollars for such a sustained amount of time. They drew comparisons between this week’s price surges to the records set on the U.S. Midwest grid in 1998 and the California energy crisis that sent power prices skyrocketing and blacked out hundreds of thousands of homes and businesses two decades ago.

Temperatures this low and heating demand this high could test Texas’s electricity price caps on Sunday.

Among the other markets moving on the cold: