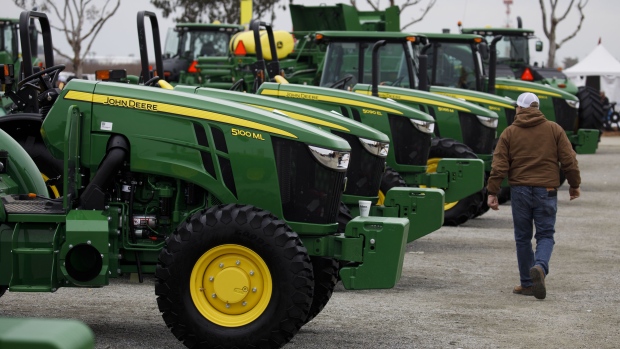 (Bloomberg) -- Over 10,000 Deere & Co. workers went on strike after representatives from the company and the United Auto Workers union failed to reach an agreement over a new labor contract.

The strike, which began around midnight Chicago time, comes after a tentative agreement was rejected that would have covered employees at 14 facilities across the U.S.

“Our members at John Deere strike for the ability to earn a decent living, retire with dignity and establish fair work rules,” Vice President and Director of the union’s agricultural implement department Chuck Browning said in a Facebook post. “We stay committed to bargaining until our members’ goals are achieved.”

“We are determined to reach an agreement with the UAW that would put every employee in a better economic position and continue to make them the highest paid employees in the agriculture and construction industries,” Deere’s Vice President of labor relations Brad Morris said in a statement, adding that the company would keep operations running while negotiations continued.

Deere shares have risen 39% in the past year amid a rally in crop prices that has buoyed farmer earnings and demand for tractors.

A work stoppage beyond a few days may make it tougher to get hold of replacement parts if equipment breaks during the harvest, according to Brian Strasser, a manager at Sinclair Tractor in Kalona, Iowa.

“Even though farmers are very resilient, if something breaks now, rather than taking hours it could take days to fix,” Strasser, who also farms corn and soybeans in East Central Iowa, said by phone.

Having the strike during the harvest season will soften the blow for Deere a little bit amid a broad-based shortage of parts, according to Stephen Volkmann, an analyst at Jefferies LLC.

“Deere is a seasonal company and we’re finishing up the harvest now in North America where these employees are,” Volkmann said in a phone interview. “It’s going into a period of weaker production so they wouldn’t be as constrained.”