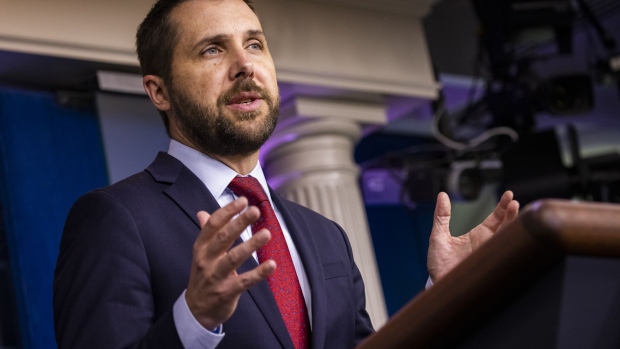 (Bloomberg) -- White House economic adviser Brian Deese said House Democrats had made “major progress” with their efforts to increase taxes on corporations and the wealthy to offset the cost of President Joe Biden’s domestic agenda -- despite the proposal falling short of some measures originally proposed by the administration.

The package offered by Democrats on the Ways and Means Committee is “not everything that the president called for, but gets at the core issues we face in our tax code,” Deese said Tuesday during an interview on Bloomberg Television’s “What’d You Miss.”

“I think we’re seeing major progress over the last couple of days in bringing forward the tax reform agenda that the president outlined earlier this year,” Deese said.

The House bill would increase the top capital gains rate -- before a Medicare surtax -- to 25% from 20%, short of the 39.6% proposed by Biden to equalize the taxation of investment and wage income. The top corporate tax rate would increase to 26.5% from 21%, less than the White House proposal of 28%.

The smaller increases are intended to mollify business-oriented Democrats who represent more conservative districts and states. The resulting reduced government revenues could, however, make it harder for the White House to claim that a spending package that could total as much as $3.5 trillion over 10 years is fully paid for.

Democratic party leaders operating with razor-thin majorities in both congressional chambers must also satisfy progressives who have called for ambitious spending to address climate change and health care crises.

Deese said that Biden’s top focus in reforming the corporate tax structure was reversing the “most negative impacts” of the 2017 overhaul under President Donald Trump, as well as implementing a global minimum tax pursued by the U.S. and other major economies. He also said the White House was continuing to negotiate with House Democrats over elements of the overall package, including a dispute over prescription drug price reform that has divided members of the party.

“Those are the kind of design details that we’re working on actively with the committees in Congress, and I think that they’ll get hammered out across time,” Deese said.

Deese also said the White House was hopeful Congress could pass an increase in the debt ceiling in a bipartisan manner, noting that Democrats had joined Republicans to do so three times during the Trump administration.

“Even as we have policy debates on major economic policy issues, we all should put politics aside when it comes to the debt limit, and do what’s right,” Deese said.