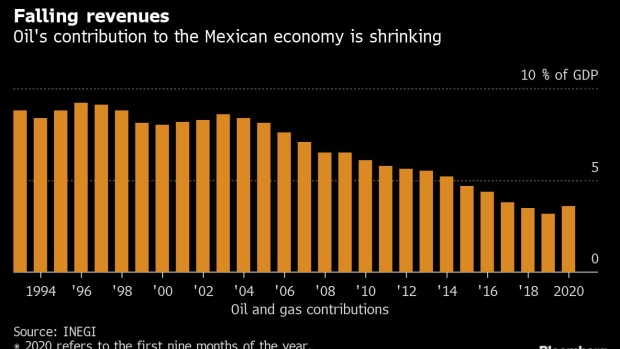 (Bloomberg) -- In financial markets awash with so much cash that junk bonds can yield less than 2%, the state-owned oil giant Petroleos Mexicanos is a jarring outlier.

At 5.4%, the yield on the company’s benchmark bonds is not only well above that of similarly rated debt, it’s also almost four percentage points higher than the rate investors demand to buy Mexican government bonds. That gap -- known as the sovereign to quasi-sovereign spread -- is the biggest of its kind in the world, and the message it sends is crystal-clear: Pemex’s financial woes are so severe that investors have serious doubts about whether the government will bail it out when needed.

But is that a rational fear?

To some long-time financiers, it is not. Pemex yields, they say, should be much lower. For as bad as the company’s financials are today -- and they are almost certainly worse than ever -- creditors have history on their side. Never once in the past half century has a financially healthy government like Mexico allowed a state-run company of Pemex’s import to default on its bonds, according to Lee Buchheit, who was involved in almost every major sovereign debt restructuring carried out over that time as a lawyer at Cleary Gottlieb Steen & Hamilton.

“Companies like Pemex that are so important to a country’s economy,” Buccheit says, “everybody knows that they can’t really be allowed to fail.”

Especially under the direction of a president like Andres Manuel Lopez Obrador, a populist firebrand who was born in the heart of Mexican oil country and has long made returning Pemex to its former glory a central part of his economic doctrine. For Alliance Bernstein, Pacific Investment Management Co. and Emso Asset Management, AMLO’s obsession with Pemex was a key factor in their decision to make a contrarian bet on the bonds.

“This particular administration and this particular president has been a longstanding supporter and a champion of the nationalization of the oil and gas industry in Mexico,” said Pramol Dhawan, who heads emerging markets at Pimco, the No. 2 holder of Pemex debt. “I find it quite hard to envisage a scenario where the government will spite itself and let Pemex go.”

In an interview Wednesday evening with Bloomberg News, Finance Minister Arturo Herrera emphatically re-stated the government’s commitment to Pemex, calling it “one of the most important assets of the country” and pledging to unveil in coming days a significant reduction to the company’s tax burden this year to help stabilize its finances. Pemex, he said, is “an asset we have to take care of.”

By almost any measure, Pemex is worse off than at any time in its 82-year history. Its oil output has fallen sharply since the early years of this century. Its $110.3 billion of debt, by far the most among peers, just keeps swelling. Its death toll from Covid-19 was the highest of any company tracked by Bloomberg last year, and the numbers continue to rise as it struggles to maintain operations.

But investors counting on Lopez Obrador’s unwavering support have made a fat profit on Pemex bonds over the past few months, with notes due in six years returning 15% since the end of October -- four times the average for emerging markets. And Pemex’s yields remain unusually elevated. The company’s spread over the sovereign stands at 382 basis points, more than 20 times the equivalent measure for Petroleo Brasileiro SA and five times the level for Colombia’s Ecopetrol SA.

Pemex’s spreads are even more than 100 basis points higher than those for the poster child of quasi-sovereign risk: South Africa’s Eskom Holdings SOC Ltd., the unprofitable state-owned utility that relies on government bailouts to service its debt. Its notes yield about 200 basis points more than sovereign bonds.

In the past decades, there have been examples of state-owned companies defaulting in Dubai and Russia, but in those instances the governments were also in distress. Mexico, by contrast, enjoys investment-grade credit ratings even as Pemex’s finances become ever more precarious.

A Pemex spokeswoman didn’t respond to a request for comment. Herrera said there’s no risk of default.

The oil producer’s debt load is rising as output hovers near the lowest in four decades. Volatile oil prices amid the coronavirus pandemic have added to its woes, forcing the company to slash investment. It’s squeezing suppliers to whom it owes billions of dollars.“You’re starting to play with fire,” said John Padilla, managing director at IPD Latin America. “This is a game of mercy. The only question is, when do you hit the button?”

In all the years Pemex has been on life support, successive Mexican governments haven’t pulled the plug. That’s partly because of the influence Pemex and its more than 125,000 employees have over the country, where sovereignty over the oil industry is seen as part of the nation’s heritage. The anniversary of Mexico’s 1930s expropriation of oil companies is celebrated across the country on March 18.

Lopez Obrador, 67, campaigned on a promise to revive Pemex, but it’s been a challenge, with downgrades to junk by Fitch Ratings and Moody’s Investors Service Inc. Help has come mostly in the form of stop-gap measures, such as 46.3 billion pesos ($2.3 billion) in tax benefits in 2020 and a debt swap with the government in December that freed up 95.6 billion pesos to repay short-term liabilities.

For all the worry about Pemex’s finances, the question for many investors simply comes down to whether they can keep counting on that government support.

At Emso Asset Management, a Pemex bondholder, head of strategy Patrick Esteruelas says Mexico is well aware that a default or restructuring would raise doubts about the administration’s willingness to pay its own debts.

“The AMLO government views Pemex as a central pillar of its goal to achieve energy self-sufficiency,” he said. “We see Mexico sovereign risk and Pemex risk as effectively the same.”