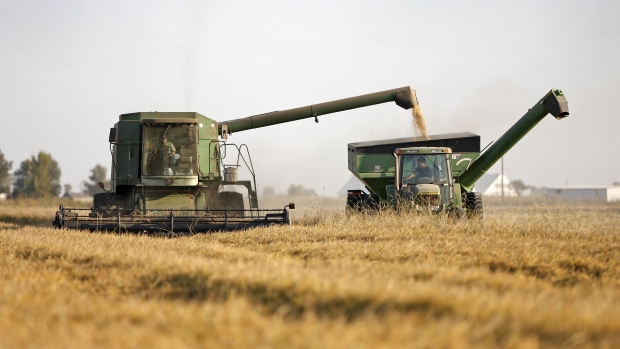 An American Commodity Co. LLC (ACC) worker unloads calrose medium grain rice into a bankout wagon pulled by a tractor during the annual rice harvest in Williams, California. Japan's decision on whether to enter talks on the partnership, which would slash tariffs, including a 778 percent duty on rice, is expected this week. , Romy Varghese

(Bloomberg) -- In the heart of California’s rice country, a project that dealt municipal-bond investors one of the biggest high-yield defaults of the past decade is about to ask them for more cash. And there’s every reason to expect burned debtholders to go along.

After years of delay and setbacks including the pandemic and a fire, CalPlant I LLC last year finally finished building a facility that produces a unique type of fiberboard made from a rice-cultivation byproduct called rice straw. The company has equity backing from entities including a subsidiary of the Teachers Insurance & Annuity Association of America and has already borrowed $344 million since 2017 through sales of unrated tax-free debt, most of which is in default.

Still, the plant, which started making panels in November, needs about $18 million more to fully scale up to commercial operations. Bondholders appear to have faith, despite the missed debt payments. The company is poised to win final approval from California officials on Aug. 11 to sell that amount of new securities, most of which will likely go to the existing investors.

The quest for additional financing comes at an opportune time for the borrower: Portfolio managers have plenty of room to plow more money into a struggling venture because there’s so much cash in the $4 trillion muni market seeking tax-free income with a bit of yield. There are other forces at work, too: The residential construction boom has lifted the prices of materials that go into furniture and cabinets. And investors have an incentive to lay out more money if it helps ensure the project succeeds instead of getting caught up in an uncertain bankruptcy process.

“They’re already educated and exposed and they have money to burn,” he said. “So why not invest it in more CalPlant if that creates a positive outcome? If they remain constructive on the project, then pricing on their bonds remains constructive as well.”

Leaning again on debt investors could help achieve the dream of CalPlant co-founder Jerry Uhland, who quit rice farming to bring the patented idea to fruition at a site in Glenn County, north of Sacramento. The company says it’s producing the world’s first medium-density fiberboard made from rice straw.

“I have no hair left, but other than that, things are going better than they were a year ago,” Uhland, speaking from the facility’s straw yard, told board members of a California agency in a virtual meeting in July. “I believe the light at the end of the tunnel is nearing.”

Uhland and other executives didn’t respond to requests for comment. But in updates posted online for bondholders, they describe difficulties such as worker injuries and construction disputes. And they cited cause for optimism, such as rising prices for fiberboard.

They also spell out the need for more money: Talks with more potential equity investors haven’t progressed and the company will run out of cash in November, according to recent monthly reports.

Such tribulations may be expected given the unique nature of the project, which seeks to turn the tons of debris cast off by California’s rice growers into an environmentally friendly, profitable product that the company has dubbed Eureka MDF.

The fiberboard market shows the potential for CalPlant should it finally achieve full commercial operations, which it’s anticipating by the end of 2023. Average prices in July were 27% higher than the five-year average ending in 2020, according to industry publication Fastmarkets Random Lengths.

“The market for medium-density fiberboard is very hot, and we expect it to remain that hot for at least the next 18 months to two years,” said Andy O’Hare, president of the Composite Panel Association.

Jane Abernethy, chief sustainability officer of Humanscale, a New York-based maker of ergonomic office furniture, said she’s interested in Eureka MDF. Depending on factors such as durability, it’s possible Humanscale might pay a premium for it, she said.

“They have a very good shot at ramping up and getting into production,” she said. “It sends the signal for others to see that finding innovative ways of reusing material that could be waste, that people do value it.”

The company first sold unrated municipal bonds in 2017 to build the factory, issuing $228 million of debt. Two years later, it sold about $74 million, and soon ran into trouble. It alerted bondholders in December 2019 that it would tap reserves to make debt payments. It ultimately defaulted on those two borrowings by mid-2020. It’s the third-largest high-yield muni default of the last decade, according to Municipal Market Analytics. CalPlant in October 2020 raised a third round of debt, totaling $42 million and due in 2032. It priced to yield 8.17%, at a time when rates on top-rated munis with a similar maturity were roughly 1%, data compiled by Bloomberg show.

The bid to sell more tax-exempt debt won approval on July 20 from the California Pollution Control Financing Authority. One more sign-off remains from another agency, the state’s Debt Limit Allocation Committee, whose board has the same voting members and which determines what projects get access to the low-cost financing. Uhland said in the July meeting that the amount may be less than the requested $18 million as talks with the senior bondholder group, who signed a forbearance agreement, continue.

Municipal junk-bond funds pulled in a record amount of money in the first half of the year, and underwriters of new deals have often been swamped with orders that are multiples of what’s available.

“The demand side is so strong that you’re able to get most deals done,” said Terry Goode, a senior portfolio manager at Wells Capital Management, which doesn’t hold CalPlant bonds. “That includes some that have had challenging credit stories or even defaulted securities.”

The top three bondholders -- Franklin Resources, Invesco Ltd. and Sun Life Financial -- hold a combined $162 million, according to the most recently available data compiled by Bloomberg. Spokespeople for the three firms declined to comment.

“None of us bondholders want to see the project fail,” said Jim Colby, senior municipal strategist at Van Eck Associates Corp., which says it holds about $28 million of CalPlant debt.