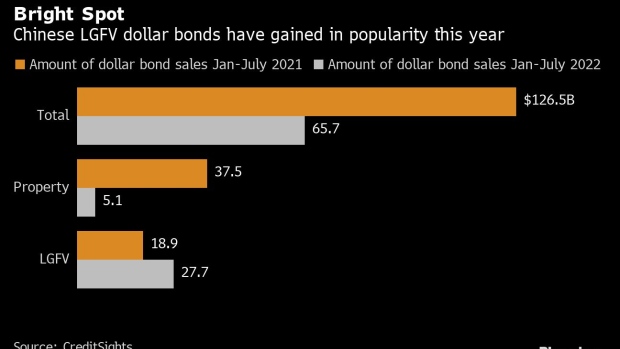 Residential buildings in the Kangcheng neighborhood of Shanghai, China, on Monday, Aug. 1, 2022. In a country that only tolerates dissent in small doses—and relies on property as its economic growth engine—a mortgage boycott by hundreds of thousands of middle-class Chinese has become a five-alarm fire for authorities. Photographer: Qilai Shen/Bloomberg , Bloomberg

(Bloomberg) -- China’s local government financing vehicles are back in vogue with credit markets, as investors look for safety in the state sector amid record defaults by private developers.

The off-budget entities, which help cities and provinces raise funds for infrastructure spending, increased dollar bond sales between January and July by 46% to $27.7 billion, according to data compiled by research firm CreditSights. In contrast, total issuance in China’s dollar debt market fell 48%.

Amid the latest rise in LGFV popularity is some investors’ expectations for them to benefit from Beijing’s new infrastructure push and their possible role in cleaning up the mess left by defaulted builders. Others warn, however, that China’s housing slump is so severe that local authorities will be left with diminishing resources to shore up LGFVs’ already-strained finances.

“LGFVs are key to implementing China’s infrastructure stimulus this year and the local governments might need to rely on LGFVs” to finish failed developers’ housing projects, CreditSights analysts Zoey Zhou and Zerlina Zeng wrote in a note. That should keep government support strong for the sector, they said, though focus should return to cleaning up local government debt “once the economy regains momentum.”

LGFVs emerged as a key source of both growth and risk in China following the global financial crisis, when they started borrowing heavily to build regional economies. Beijing’s attitude toward them has swung back and forth over the years, imposing debt curbs during boom times and loosening its grip when growth falters.

Despite a lack of explicit backing from the state and a few brief payment scares in recent years, LGFVs have so far avoided delinquencies in public debt markets.

The sector is “a sweet spot to be in” as LGFVs provide a certain level of protection against default risks and market volatility, said Judy Kwok, head of Greater China fixed income research at Manulife Investment Management. The vehicles’ offshore dollar bonds have declined 0.4% this year, according to an iBoxx index, compared with a loss of about 35% in a Bloomberg gauge of Chinese junk dollar debt that predominately consists of developers.

But how long the optimism lasts is in question given there’s no end in sight to an unprecedented property crisis that has pummeled land sales, a major source of income for local authorities.

Meanwhile, it’s lower-quality LGFVs that have been dominating the sector’s dollar bond issuance given they’re discouraged from doing so onshore, according to the CreditSights analysts. They expect such LGFVs to continue selling the bulk of the sector’s dollar bonds the rest of this year while higher-quality entities keep tapping the onshore market, where funding costs have been trending lower.

“Local governments are walking a tightrope,” said Henry Loh, head of Asian credit at Abrdn Plc. “Their willingness to support LGFVs is intact, but their ability to help is a growing question.”