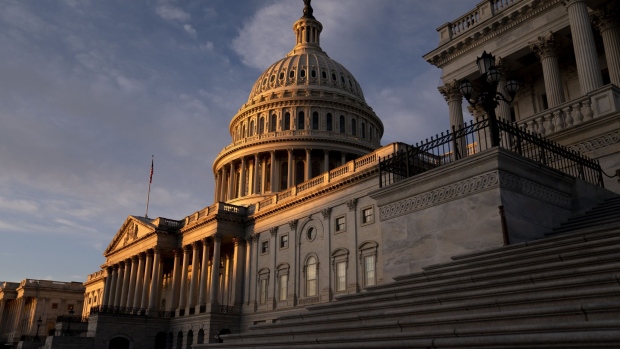 (Bloomberg) -- The House overwhelmingly approved a crucial $740.5 billion U.S. defense policy bill despite a veto threat by President Donald Trump, who wanted it to include a provision stripping protections from social media companies.

The 335-78 vote Tuesday for the measure, which now goes to the Senate for final approval, indicates Trump could face the first veto override of his presidency.

Trump has vowed to reject the legislation if it includes a provision to rename bases that honor Confederate generals and if it doesn’t repeal the law that protects technology companies from liability for most of their user-generated content.

The bill, H.R. 6395, is considered must-pass legislation because it authorizes not only billions of dollars for weapons systems but also benefits for troops. The measure would increase hazardous duty pay to $275 from $250 per month.

The measure “is not about us, or our political agendas or our political grievances. This bill is about the men and women who risk their lives to protect and defend us and our freedoms and their families,” Representative Mac Thornberry of Texas, the top Republican on the House Armed Services Committee, who is retiring, said on the House floor. “Without this bill both the troops and America’s security will be hurt.”

The Senate will take up the legislation before sending it to the president for his signature or veto. House Armed Services Chairman Adam Smith, a Democrat from Washington, said the House would return over the holidays to override a veto if necessary.

The bill would authorize $732 billion in discretionary spending for national defense, including $69 billion for overseas contingency operations.The defense measure would authorize funding for 93 F-35 fighter jets built by Lockheed Martin Corp. after the Trump administration requested 79.It also would back funding for the construction of two Virginia-class submarines a year, after the administration originally requested funding for only one to free up money for nuclear deterrence. It would also provide contract authority for as many as two nuclear Columbia-class submarines made by General Dynamics Corp.

Trump wants to attach to the defense measure an unrelated provision that he’s been seeking to eliminate Section 230 of the Communications Decency Act, which protects technology companies from liability for most content published by their users.

There’s some support from lawmakers of both parties to modify or eliminate Section 230, but members responsible for the defense bill say it’s the wrong place to have that fight.

He said the defense authorization measure, which has been enacted annually for the past 59 years, “is one thing in a very tumultuous time we ought to agree on.”

The president is “very upset at social media companies, and the results of the election have poured fuel on the flames,” but most lawmakers don’t think the defense authorization bill is a good avenue, Republican Thornberry told reporters on Monday.

The legislation would establish a commission to study and provide recommendations, within three years, on the removal of names, symbols, displays, and monuments that honor or commemorate the Confederacy. Although it would apply only to Defense Department properties, Trump has inaccurately said in tweets that it would affect monuments in national parks.

The legislation also would address diversity in the military ranks by requiring the removal of personal identifiers in promotion and selection pitches, a step backed by Democratic Representatives Jackie Speier of California and Anthony Brown of Maryland.

The defense measure would establish a Pacific deterrence initiative to counter China’s influence in the region. Congress plans to authorize $2.2 billion for the new effort designed to boost the U.S. defense posture, weapons and alliances in the region.

Lawmakers took aim at Russia with provisions including additional sanctions on Turkey for purchasing a Russian-made missile defense system, as well as penalties on the Nord Stream 2 natural gas pipeline from Russia to Germany. The State Department has said it’s weighing sanctions against Turkey under the Countering America’s Adversaries Through Sanctions Act, but lawmakers have grown frustrated with the delay and are using the defense bill to push for action on sanctions.

House and Senate negotiators also agreed to target insurers and technical certification companies working on Nord Stream 2. The move adds to penalties that stopped work on the natural gas link under the Baltic Sea just a few weeks before the project was to be completed in December 2019.