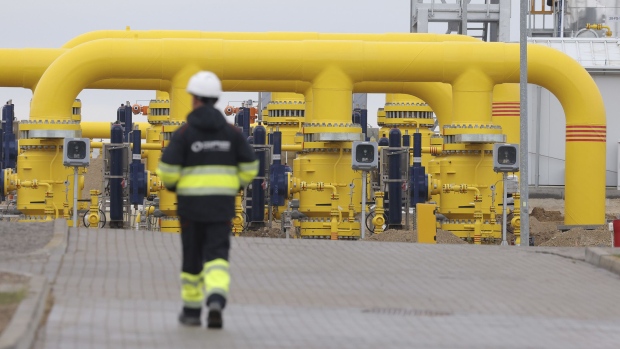 GOLENIOW, POLAND - SEPTEMBER 27: A worker of Polish natural gas company Gaz System walks among pipes at a compressor station of the new Baltic Pipe natural gas pipeline on the day of the pipeline's official opening on September 27, 2022 near Goleniow, Poland. The new pipeline connects Norwegian natural gas fields in the North Sea with Denmark and Poland. Countries across Europe are seeking to expand their natural gas supplies as they pivot away from imports of natural gas from Russia. (Photo by Sean Gallup/Getty Images) , Photographer: Sean Gallup/Getty Images Europe

(Bloomberg) -- Alarms are being raised about the security of Europe’s energy assets as nations worry if more widespread attacks will follow the Nord Stream pipeline blasts.

The US said tankers carrying liquefied natural gas to the region should be on high alert after the “apparent sabotage” of the pipelines earlier this week, and Norway said its defense forces will be “more visible” around oil and gas facilities after an “abnormally high” amount of drone activity. NATO’s secretary general met with Denmark’s prime minister to discuss “the protection of critical infrastructure.”

“Everybody should be on high alert,” US Energy Secretary Jennifer Granholm said Wednesday in Vienna. Asked whether US LNG shipments to Europe also need to take more precautions, Granholm said: “Of course. We have to be on heightened alert.”

Russia had already slashed flows to Europe before the explosions, which coincided with the opening of a new pipeline taking Norwegian gas to Poland. There’s now just one way for Russian supplies to reach Europe -- via Ukraine -- and state-run Gazprom PJSC warned that’s even at risk.

The risks to Ukraine’s gas infrastructure are rising, but the country will continue transit for as long as possible, Naftogaz Chief Executive Officer Yuriy Vitrenko said in an interview with Bloomberg Television.

The blasts heightened the energy conflict with Russia, which is squeezing supplies to Europe after sanctions were imposed because of the invasion of Ukraine.

Germany’s Interior Ministry issued a general security threat Wednesday after ruling out natural causes for the blasts on the Baltic Sea pipelines. Europe’s biggest economy is most dependent on Russian gas, and officials have grown increasingly concerned about further attacks.

“We have to prepare for scenarios that were unthinkable until recently,” Interior Minister Nancy Faeser said in an emailed statement.

Benchmark futures rose 11% Wednesday after surging 22% the day before, and the UK equivalent rocketed by as much as 35%, the most in three weeks. European energy ministers meeting Friday in Brussels will discuss the pipeline damage, EU Justice Commissioner Didier Reynders said.

“Before the summer, the council and the commission reached an agreement on security measures for infrastructure which are being implemented,” he said. “And it may be that we need to go even further to secure infrastructure in the light of the recent events.”

Prime Minister Jonas Gahr Store said there’s no indication of direct threats, yet preparedness is “high.” The government has designated extraction of petroleum and pipeline gas transport to Europe as a “fundamental national function” to allow more measures to protect the industries, Store said.

“While clearly an extreme scenario, if Norway’s gas pipelines were to be taken offline, the consequences for Europe would be colossal,” said Maeva Cousin, who covers the euro area for Bloomberg Economics.