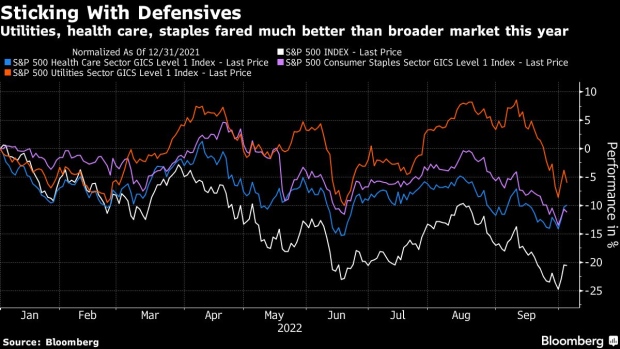 (Bloomberg) -- Defensive stocks have fared better than their cyclical counterparts during this year’s bear market despite having a dimmer profit outlook. As the economy slows further amid aggressive central bank tightening, they’re still seen as investors’ safest bets heading into that environment.

Utilities, consumer staples and health care have outperformed most S&P 500 sectors this year, besides energy, which continues to benefit from higher oil prices. As recession concerns grow, investors typically look to add exposure to these industries that are expected to show resiliency during a downturn.

Some strategists also include technology to the list, but it might be premature to jump on the rate-sensitive sector as long as the Federal Reserve continues to hike.

Earnings remain a threat for defensive shares, but it hasn’t deterred investors so far. Despite losing ground this year, cyclicals are expected to maintain their EPS growth edge over defensives into late 2024, according to Bloomberg Intelligence. The spread between the two may narrow next year, but analysts forecast it will still easily surpass cyclicals’ 259-basis point average advantage over defensives since 1998.

Apart from energy, cyclical sectors such as industrials and consumer discretionary are seen as posting the largest EPS growth in the third and fourth quarters, for example, while health care and consumer staples are staring at negative estimates, Bloomberg Intelligence data show. Discretionary tops the list of growth profit forecasts for each quarter of next year.