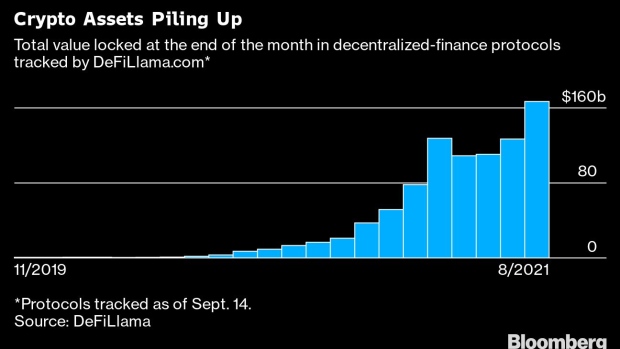 (Bloomberg Markets) -- To understand the world of decentralized finance–or at least the hype surrounding it—it’s helpful to remember what occurred in the music business about two decades ago.

In 1999, at the height of the dot-com boom, a 19-year-old college dropout named Shawn Fanning introduced Napster, a website that allowed users to share digital music files for free. Suddenly millions of users were downloading MP3 files of songs by Dr. Dre, Eminem, and Metallica instead of buying compact discs. Needless to say, this disrupted the business model that musicians and the recording industry relied on. Napster supporters argued that the industry needed to wake up and embrace the Digital Age.

Twenty years later, one of the goals of the so-called DeFi movement is to disrupt the financial industry in a similar way—by using peer-to-peer technology to connect users directly with lenders, borrowers, payments, and investments, and without middlemen such as banks, brokerages, exchanges, and asset management companies.

The ambitions for this new Napster for money can sound like an attempt at a financial coup d’etat. “DeFi does not simply improve the user experience of banking; it dismantles it altogether,” is how the digital asset management company Arrington XRP Capital puts it. QuickTake: Why ‘DeFi’ Utopia Would Be Finance Without Financiers: QuickTake

Of course the threat that Napster would dismantle the record industry didn’t last very long, as is often the case with disruption that breaks the rules—in that case the copyright laws governing the sale of music. The site was eventually shut down following lawsuits brought by the industry, under the unlikely leadership of the heavy metal band Metallica. The company filed for bankruptcy protection in 2002.

Many applications of DeFi also appear to flout regulations that were crafted around the world over decades to fend off abuses and corruption. Yet to many true believers, skirting those rules is DeFi’s killer app. They say the rules cause collateral damage by preventing or limiting access to the financial system for many people worldwide. Unlike centralized—and regulated—crypto exchanges such as Coinbase that have to comply with anti-money laundering and know-your-customer rules, DeFi exchanges with names such as PancakeSwap, SushiSwap, and Uniswap allow anonymous participants access to public blockchains such as the Ethereum network that serve as the conduits for the free flow of money around the globe.

Much of the news about DeFi focuses on the losses that investors have suffered because of hackers or the so-called rug-pull scams that this Wild West environment has fostered. But at the same time, there really is an enormous amount of innovation under way.

When the costs of the middlemen are eliminated and crypto’s software sorcery works as intended, returns from DeFi loans can dwarf what’s available in the traditional financial world. There’s risk, of course: The funds that investors deposit into liquidity pools and the interest paid on them are in cryptocurrencies rather than dollars or another traditional fiat currency. Annualized interest rates paid on some tokens can exceed 10%, but the digital tokens sometimes crash in value and leave the investor with losses in dollar terms. Still, annualized rates can be as high as 8% or 9%, even for lenders of the cryptocurrency Dai and other so‑called stablecoins, tokens that are supposed to track the dollar or another currency one to one—albeit with a mixed history of success.

With savings accounts at U.S. banks averaging only 0.06%, according to Bankrate.com, and Treasuries across the entire curve yielding less than 2%, it’s easy to see why the space has been a magnet for cash over the past year. Although estimates vary, one tally on the high end—from the website DeFiLlama—estimates that the total dollar value locked up in DeFi investments has risen from about $7 billion a year ago to more than $160 billion today. The value of the entire cryptocurrency universe in which DeFi resides has swollen to about $2 trillion, according to CoinMarketCap.com.

Much as Napster’s viral growth in 1999 quickly overran the traditional music industry, the sums at stake in this new era of digital money are becoming the 800-pound gorilla in the room for the traditional financial system. Some might think we’re better off without the gorilla, but good luck kicking him out or even trying to get him to obey the rules.

Two things are likely to prove true. 1. Like Napster, the innovators of the DeFi world are probably due for a comeuppance as regulators catch up. 2. Also like Napster, which prompted a digital music streaming business model with new middlemen such as Spotify, Apple Music, and Pandora, DeFi has probably changed the financial industry forever.

Politicians and regulators have started to make some noise. The U.S. Securities and Exchange Commission has threatened to sue Coinbase Global Inc. if the centralized exchange lets customers earn interest on their crypto holdings. (After initially arguing that its Lend product didn’t qualify as a security, Coinbase dropped the program.) In recent speeches and interviews, SEC Chairman Gary Gensler has made it clear that he also doesn’t consider decentralized-­finance platforms out of the reach of regulators. In addition to borrowing and lending, the peer-to-peer concept is being applied to the trading of cryptocurrency tokens engineered to mimic the stock prices of big companies such as Apple Inc. and Amazon.com Inc., or even the price of crude oil and gold.

“It doesn’t matter whether it’s a stock token, a ­stable-value token backed by securities, or any other virtual product that provides synthetic exposure to underlying securities,” Gensler said in a speech in July. “These platforms—whether in the decentralized or centralized finance space—are implicated by the securities laws and must work within our securities regime.”

DeFi disrupters appear to have gotten the message. A few days after Gensler’s speech, Uniswap Labs said that because of the “evolving regulatory landscape,” it was restricting access to dozens of tokens on its trading app, including several synthetic stocks and exchange-traded funds. Still, the company said it wasn’t shutting down the underlying Uniswap protocol that allows such assets to exist, meaning the tokens can still be traded using other apps.

This highlights how any regulatory crackdown on DeFi could prove much more difficult than it was to turn off Napster’s servers—or to take action against a centralized exchange such as Coinbase. Ultimately the decentralized nature of DeFi makes it a game of whack-a-mole for regulators: If one player is shut down, another can easily take its place with computers located out of reach of the pursuing government.

“It is a balancing act for the regulators because of course they want to minimize the chance that people are taken advantage of, but they need to be careful not to be heavy-handed,” says Campbell Harvey, a finance professor at Duke University who recently co-authored a book called DeFi and the Future of Finance. “Because if they’re heavy-handed, then the protocol just moves offshore.”

The industry’s swift rate of change also poses a challenge to regulators and to traditional financial companies trying to get in on the action. The world of DeFi is, by design, self-disrupting. Because the programming involved is mainly open source software, that means “if somebody thinks of a tweak that improves the algorithm and the experience for the user, they can just lift the code, make a minor change, and they’re in business immediately—and this happens all the time,” Harvey says. “So there’s continuous improvement.”

So far, no Metallica of Wall Street has emerged to attempt to defend the status quo. In part, that’s probably because the industry’s claims to damage aren’t as clear as Metallica’s loss of income from pirated copyrighted material. And Wall Street’s reflexive response to innovation is to profit from it rather than prevent it. (And, for what it’s worth, Goldman Sachs Group Inc. Chief Executive Officer David Solomon is a dance-music DJ, not a heavy metal guitar shredder.)

But if money continues to be drawn into the world of DeFi at this breakneck pace, traditional finance may have to retaliate. “The banks realize, and the exchanges realize, that DeFi poses an existential risk to their business model,” Harvey says. “And they’re going to fight.”

Regan is a senior editor on the cross-asset and markets editing team in New York.