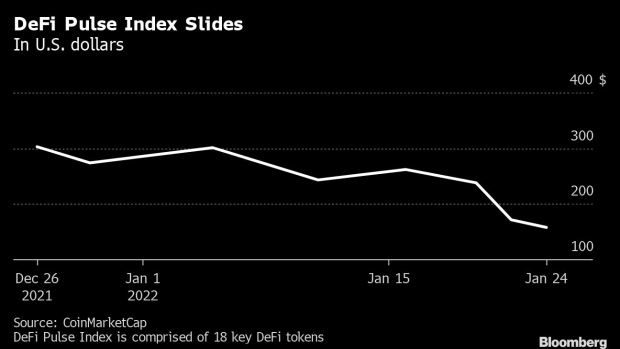 (Bloomberg) -- The recent meltdown in the digital-asset world has been especially hard on DeFi or decentralized finance, the embryonic sector that had surged in value since being touted as the future of finance less than two years ago.

While Bitcoin’s 50% decline from an all-time high reached in November has captured most of the headlines, many of the tokens used in DeFi protocols such as Aave, Compound and MakerDAO have been hit even harder in recent weeks as the sector is beset by liquidations, developer departures and a user exodus.

DeFi apps, in which users can trade, borrow and lend digital coins without use of intermediaries such as banks, burst onto the scene about 18 months ago. They began showing signs of stress during the summer amid rising concern about increased regulatory scrutiny since most DeFi projects don’t even check users’ identities to prevent illicit activities. If the crypto bear market lasts a year and user demand dries up, 80% of the decentralized apps could go away, according to Pedro Herrera, senior data analyst at tracker DappRadar.

“As far as crypto winter, DeFi dapps have never gone through it,” Herrera said. “They have experienced crashes, but this feels like a prologued one. Probably 20% of the apps that hold 80% of the industry value will survive. And we could see protocols that are not widely used fade away.”

There are currently almost 150 active DeFi-related decentralized apps, or dapps, and they hold about $107 billion in user funds -- about $30 billion less than at the beginning of the year, according to DappRadar.

Plunging token values have set off a cascading effect of loan liquidations, with nearly $300 million assets liquidated in DeFi protocols in the last week, according to industry data tracker Dune Analytics. About 1,000 positions were liquidated on apps like Aave, Compound and MakerDAO between Jan. 22 and Jan. 24, according to Dune. Solana’s network faced congestion as traders swarmed around liquidation orders.

The distress in the DeFi ecosystem even helped crater prices of major cryptocurrencies last week, according to Spencer Bogart, general partner at Blockchain Capital. On Jan. 21, the drop in major cryptocurrencies was partly due to a roughly $600 million collateralized debt position on MakerDAO that was on the verge of getting liquidated, he said. Only about $65 million of that eventually got liquidated.

Usage of DeFi dapps is dropping, with active user wallets interacting with the major applications down 20% to 30% in the last two weeks, according to DappRadar. After all, users flocked in when they could make money, largely by earning those apps’ native tokens and watching them appreciate. With DeFi Pulse Index -- representing prices of 18 major DeFi-related tokens -- down 23% since Jan. 20, the apps’ main appeal is fading. Bitcoin declined 13.5% over the same time, per tracker CoinMarketCap.

Plunging DeFi token prices are also pushing developers who worked on the protocols to look elsewhere. The apps typically pay developers with their own tokens.

“DeFi hasn’t had even a little bit of a blip. None of the protocols stopped working,” Dorman said. “There were no issues of users getting money out. That validates why a lot of us think this is the future of finance.”