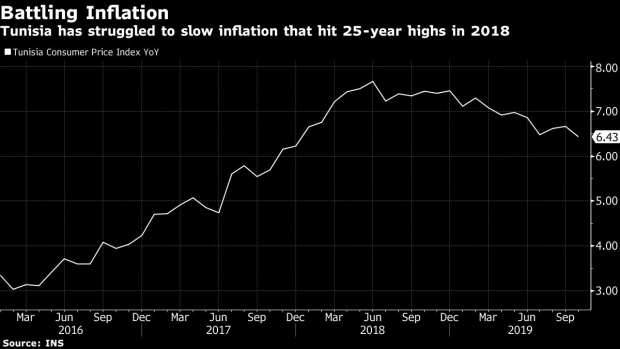 (Bloomberg) -- The honeymoon may be over for Tunisia’s outsider president, whose landslide electoral win in October signaled a resounding rejection of the political establishment.

The tension in the town of Jelma is the “first political test” for Saied, said political analyst Boulababa Salem. He “must prove that he is aware of the concerns of these young people and that he has real solutions to their problems.”

Saied, a 61-year-old former constitutional law professor, has yet to visit the area. He hasn’t publicly addressed the unrest either, which reflects a deep-seated frustration with the North African country’s failure to escape a rut of lackluster economic growth and youth unemployment around double the national average.

What Tunisians and their nine successive governments since 2011 have discovered is that there are no easy fixes. A series of terrorist attacks in 2015 battered the vital tourism sector, while political bickering and a powerful union’s demands for higher pay hobbled efforts to cut government spending.

Inflation, meanwhile, hovered stubbornly near 25-year highs for the better part of 2018 before gradually slowing to 6.5% in October.

The International Monetary Fund, which agreed in 2016 to extend a $2.9 billion loan, said in June that Tunisia’s fiscal performance has been “mixed” and urged authorities to focus on improving fiscal and external deficits while strengthening social safety nets.

Saied, who vowed a “new page in Tunisia’s history,” may be constrained in what he can do.

“Expectations are very high, and it will be very difficult for Saied to meet them adequately,” said Hamish Kinnear, Middle East and North Africa analyst at Verisk Maplecroft. Even, so, “the fact that his program for government has been vague also gives him scope to make more promises that could keep hopes up.”

Constitutionally, the day-to-day policy making powers fall to the prime minister. The likely incoming premier took the role with the support of the moderate Islamist Ennahda party, which failed to secure a majority in October parliamentary elections and is struggling to form a governing coalition.

That will only delay the kind of reforms being demanded in places like Sidi Bouzid, which has suffered from a lack of development for decades. Here Tunisia’s economic woes are even more pronounced -- and patience is in short supply.

“Young people on fire: the same tragic scene is being repeated,” said Mohamed Lazhar Guemmoudi, the general secretary of the Tunisian General Labour Union in the province. Saied must “deliver on his promises to the youth who elected and trusted him.”

When one local protester, Ismail Abdelaoui, was reached by phone, he was standing outside Jelma’s mayoral office among a crowd watching yet another young man on the brink.

“He’s holding a jerrycan of gasoline in his hand and threatening to set himself on fire,” said the 37-year-old, who’s also without a job. “This is our daily life.”

To contact the editors responsible for this story: Alaa Shahine at asalha@bloomberg.net, Michael Gunn, Amy Teibel