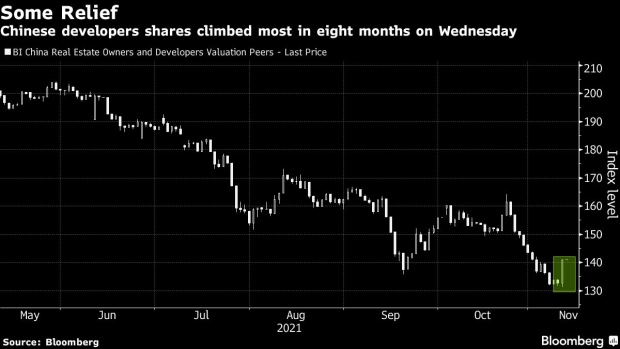 China Evergrande Group appeared to pay interest on dollar bonds at the last minute, averting default. Customers of international clearing firm Clearstream received overdue interest payments on three U.S. dollar bonds issued by Evergrande, a spokesperson for Clearstream said. There are also increasing signs that Beijing may take steps to address the liquidity crisis affecting the nation’s developers. Bank lending to property firms rose “sharply” in October and that momentum is expected to continue into this month, the China Securities Journal said in a front-page report.

A gauge of real estate stocks rose 3.3%, heading for its best two-day gain since July 2020, with short sellers unwinding their bearish bets. Developer shares and bonds climbed on Wednesday amid speculation that China will allow state-owned property firms to acquire distressed rivals without breaching metrics on leverage. Local news agency Cailian later reported that state-owned enterprises made such a request to regulators.

Betting against Chinese developers is suddenly becoming a more perilous game, as expectations of easing measures squeeze short sellers who made a killing targeting the stocks this year.

A stock gauge of the nation’s real estate companies jumped 6.2% on Wednesday. Short-selling volume exceeded 20% of total equity turnover for 13 of the 28 Hong Kong-listed firms on the index (mainland stocks aren’t eligible for short selling). For Sunac China, whose shares rose 15% -- the most in seven years -- short selling volume was the third-highest on record as bears were forced to unwind their positions.

First it was China Evergrande Group. Then it was smaller junk-rated developers. Now most of China’s largest property firms are getting pummeled in the bond market, adding pressure on Beijing to limit the damage.

Higher-rated companies such as Country Garden Holdings Co. and China Vanke Co. have seen their dollar bonds decline in recent days amid concern over the size of the industry’s hidden debt and the ability of firms to refinance.

The widening fallout may prompt policy makers to take steps to ease the liquidity crisis. On Wednesday, a local media report said officials may loosen curbs on domestic bond issuance to prevent financing conditions from worsening. The news triggered gains in property companies’ bonds, although analysts cautioned such a development would only benefit higher quality firms. Cailian also reported that state-owned enterprises have asked regulators to adjust the “three red lines” lending limits for mergers in the sector, helping lift developer shares.

Clearstream customers received overdue interest payments on three U.S. dollar bonds issued by Evergrande, a spokesperson for Clearstream said, while two investors that hold two of the bonds confirmed that they received the payments, asking not to be identified because they weren’t authorized to speak publicly.

Evergrande missed the initial interest deadlines last month, data compiled by Bloomberg show. The affected bonds include a 9.5% note due 2022, 10% bonds due 2023 and its 10.5% note due 2024. The property giant pulled back from the brink of default in October by paying other coupons before the end of its grace period.