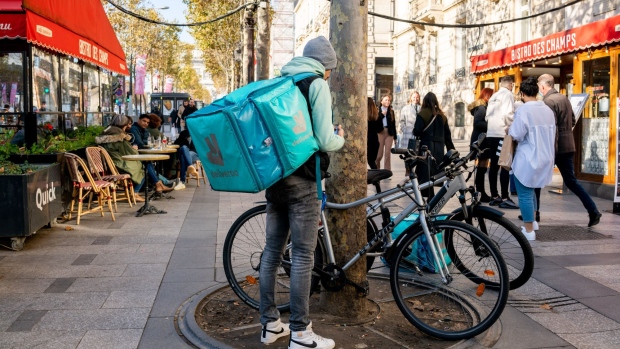 A food delivery courier for Deliveroo Plc on the Champs Elysees in Paris, France, on Wednesday, Nov. 10, 2021. French President Emmanuel Macron sought to rally the French and encourage them to get vaccinated while presenting a bright outlook for the economy in a national address five months before the presidential election. , Bloomberg

(Bloomberg) -- Shares of Deliveroo Plc and Delivery Hero SE both fell in early London trading after Bloomberg reported millions of people working for such apps could be reclassified as employees after a European Union labor rights plan.

The European Commission is set to push countries to reclassify as many as 4.1 million gig economy workers including food couriers and ride-hailing drivers as employees regardless of what their contracts state. Platforms, rather than the worker, would bear the burden of proving that they are not employees.

The proposal, which will be published December 8, will be “grist for the mill of those wanting the gig economy to be eradicated,” Jefferies analyst Giles Thorne and colleagues wrote in a note to clients on Friday.