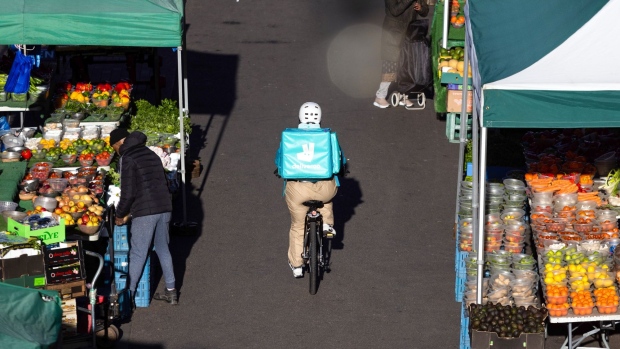 A food delivery courier for Deliveroo Plc cycles past market stalls selling fresh fruit and vegetables in Croydon, Greater London, U.K., on Monday, Jan. 17, 2022. Inflation figures for the U.K., due on Wednesday, are likely to hold steady in December, before peaking in April at around 6.5%. , Bloomberg

Deliveroo Plc is opening its first physical grocery outlet in the UK on central London’s New Oxford Street in an expansion of its rapid delivery service.

Customers will be able to purchase items by ordering through digital kiosks in the store, ordering ahead via the Deliveroo app for in-store collection or for delivery nearby from Monday, according to a statement. The new effort from the London-based food delivery company builds on its partnership with grocery chain Wm Morrison Supermarkets Plc.

Traditional retail stores have been shrinking or shutting down, hit by online shopping and the pandemic. Despite the collapse, online-focused firms have been entering the market. Amazon.com Inc., the largest shareholder in Deliveroo, now runs a number of cashier-less convenience stores throughout London.

With shoppers now also cutting back on online-shopping, Deliveroo has been turning to new avenues for revenue. In its latest financial report, Deliveroo said its loss widened less than expected thanks to sales from its new ad platform.

For more than a year, Deliveroo has been rolling out its Hop service offering rapid delivery of groceries from micro-fulfillment centers. There are now 16 such sites across the UK, France, Italy, Hong Kong and the UAE, a company representative said.