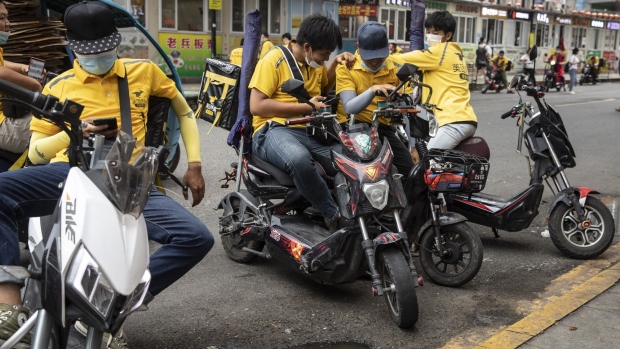 Food delivery couriers for Meituan Dianping sit on their motorcycles in the Humen area of Dongguan, Guangdong Province, China, on Wednesday, May 13, 2020. The Pearl River Delta industrial belt has served as one of China’s most important growth engines since the Communist Party opened the economy four decades ago, propelling its rise to become one of the world’s leading powers. But now in Guangdong the situation is getting dire in some labor-intensive sectors where the widespread struggle to earn cash risks turning into a big political problem for Chinese President Xi Jinping. Photographer: Qilai Shen/Bloomberg , Bloomberg

(Bloomberg) -- Meituan is considering a second listing in China as soon as next year after its Hong Kong shares more than quadrupled in the two years since its debut, according to people familiar with the matter.

The world’s largest meal delivery service has held initial discussions with advisers for the potential share sale in China, said the people, who asked not to be identified. Meituan is weighing ChiNext, a Nasdaq-style board under the Shenzhen Stock Exchange, among possible listing venues in China, one of the people said.

Deliberations are at an early stage and the company hasn’t made any final decisions on timing nor size of the potential offering, the people said. A representative for Meituan declined to comment.

Meituan’s shares erased earlier losses and rose as much as 2.7% to a record high in Hong Kong following the Bloomberg News report.

Meituan, backed by Tencent Holdings Ltd., raised about $4.2 billion in its Hong Kong initial public offering in 2018. The stock has since jumped more than 300% after the company turned profitable and demand for takeout service bounced back from a pandemic-induced disruption. Meituan has a market value of about $223 billion as of Tuesday.