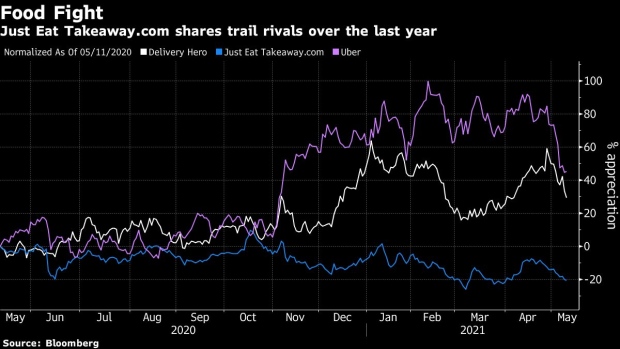 Delivery Hero SE plans to re-enter its home market of Germany next month, taking on Just Eat Takeaway.com NV less than three years after it ended an expensive rivalry by selling its local operations to the Dutch competitor.

Delivery Hero will start to roll out the Foodpanda brand in its home city of Berlin in June, potentially expanding to other regions by the start of a wider launch in August, Chief Executive Officer Niklas Oestberg said in an interview.

Oestberg said that a lot has changed for the company since the 2018 decision to exit Germany, with a solidified international presence in Asia and new products, such as grocery delivery, that rivals don’t offer. Meanwhile, customers who are increasingly comfortable ordering online delivery after the pandemic lockdowns have provided an opportunity, he said.

“Now we feel like we can come back with a much, much better service,” Oestberg said. “I don’t think we would have entered Germany if we felt everything has been built.”

The rivalry in Germany has only gotten stronger since Delivery Hero made the decision to leave. Uber Technologies Inc. said last month it would also expand in Europe’s largest economy, following a similar move last year from smaller Finnish rival Wolt.

Still, Oestberg said Delivery Hero should be able to take market share with a broad range of delivery options, including groceries and convenience goods, in as fast as seven minutes. Market leader Just Eat Takeaway.com -- which is focused on restaurant delivery and hasn’t yet closed its acquisition of GrubHub Inc. -- is “in a challenged moment,” he said.

After selling out of Germany, Delivery Hero turned its focus to Asia. The company recently bought a controlling stake in South Korean rival Woowa Brothers Corp., and said in the latest quarterly update that it expects revenues this year may more than double with a planned expansion of its “dark stores,” warehouses that stock groceries and household goods, and growth into new markets in Asia.

Shares in Delivery Hero are trading up nearly 30% over the past year and the firm announced plans in January to sell shares that could raise as much as $1.6 billion for potential deals.

Delivery Hero has already begun to sign on restaurants in Germany and expects to initially hire hundreds of people for its team and as couriers. Oestberg said it’s unclear what kind of labor model Delivery Hero will use for its couriers. Uber plans to contract out its delivery riders to third-party suppliers.

“It’s always a big advantage of being in a home market, you test your product every day,” Oestberg said. “In order to build a world-class service, it helps to eat your own food.”