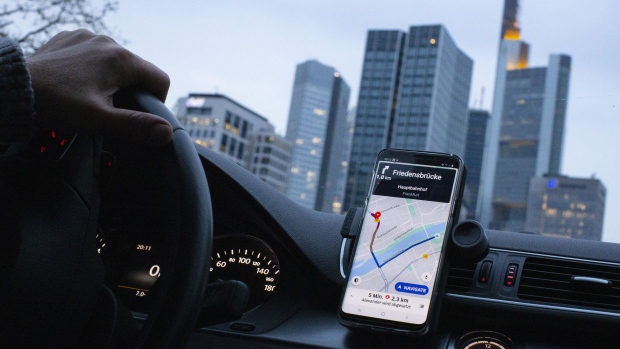 A dashboard-mounted smartphone displays the Uber Technologies Inc. app as an Uber X driver heads towards skyscrapers in the 'Mainhattan' financial district in Frankfurt, Germany, on Friday, April 12, 2019. Uber's long-awaited roadshow for what is expected to be 2019's biggest U.S. IPO is expected to kick off on April 26. Photographer: Alex Kraus/Bloomberg , Bloomberg

(Bloomberg) -- Companies that run food delivery and ride-hailing apps are concerned that the European Union will push for gig workers to be considered employees rather than self-employed under a forthcoming proposal aimed at bolstering their labor rights.

The draft European Commission proposal, seen by Bloomberg, would apply to any company that controls digital workers’ performance by determining pay, controlling communication with customers, or offering future work based on previous performance -- a move that would be sure to hit companies like Uber Technologies Inc., Deliveroo PLC and Bolt Technology OU if implemented.

These workers would have the “rebuttable presumption of employment,” according to the draft, which would mean there is an employment arrangement no matter how the contract is worded.

The EU’s executive arm doesn’t have the authority to mandate labor laws across the bloc and would leave it to EU countries to interpret the rules. The proposal, which is expected to made public next week, said some workers will still be considered “self-employed” but doesn’t make clear which ones.

Platforms that rely on gig work are pushing back against the commission’s plans, which they argue risk putting food delivery workers and drivers out of work. They warn against stricter rules like those implemented by Spain, which prompted Deliveroo to pull out of the country and cost thousands of food delivery workers their jobs.

“Not only is the commission trying to answer a good issue the wrong way, but also what is being done will have very harmful consequences on the platform workers themselves -- that’s the most important, job destruction -- on the platforms in Europe and the efficiency of the services for the European citizens,” said Aurelien Pozzana, the head of public policy at Bolt.

The EU’s plans come at a fraught time for food delivery and ride-hailing apps, which are facing legal battles across the EU over how workers are classified and what rights they should be afforded. The draft, first reported by the Financial Times and dated from mid-October, is likely to change before the commission publishes its official proposal on Dec. 8.

Industry officials with knowledge the discussions said the commission still plans to include the presumption of employment in the final draft.

One goal of the commission’s final proposal is to ensure workers are properly classified to proect their rights and allow them to access social security schemes, a commission spokesperson said, without commenting specifically on the draft proposal. The EU is also pushing for more transparency over the apps’ algorithms, as well as data on the apps and their workers.

This debate is occurring even as the EU capital itself is stuck in a spat with Uber, which shut down the bulk of its business in Brussels last week amid a standoff with the city government over driver rules that date back to 1995.