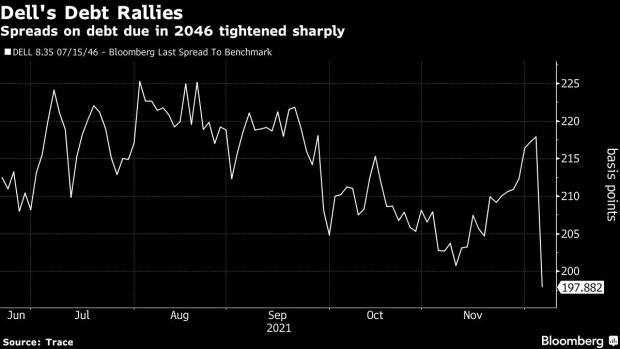 (Bloomberg) -- Dell Technologies Inc.’s bonds rallied on Monday, after the software and computer company said it will buy back older securities in a move expected to cut future interest expenses.

Risk premiums on the company’s 8.35% notes due July 2046 tightened 0.20 percentage point from Dec. 2 levels to 1.98 percentage point over Treasuries as of 2:10 p.m. in New York. That’s closer to the level the company will pay to buy back the securities as part of a larger tender offer that will total as much as $2.5 billion.

Dell is also selling $2.25 billion of new notes on Monday, the proceeds of which can be used for purposes including buying back bonds in the latest tender offer. The company has broadly been cutting debt levels and reducing its interest expenses this year, which has helped it return to investment-grade ratings.

“Though the pace of deleveraging may slow, it should continue, while the risk of fallen-angel status dissipates,” he said adding that “bond spreads and credit-default swaps may tighten even further.”

Dell this year spun off its stake in VMWare Inc., which has helped the company raise cash to pay down debt. Dell’s 2016 acquisition of VMware’s parent, EMC Corp. helped the computer maker to branch out its business from personal computers but left it with a heavy debt load.