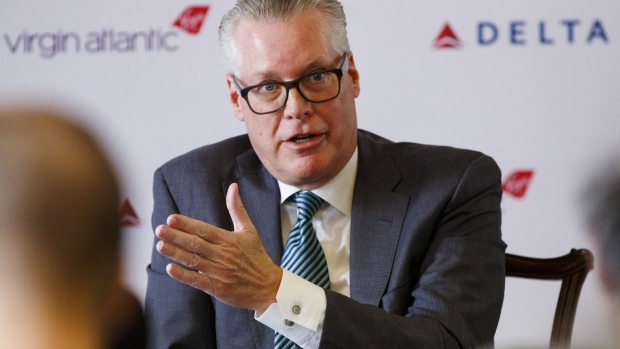 Ed Bastian, chief executive officer of Delta Air Lines Inc., speaks during a briefing ahead of an Aviation Club lunch in London, U.K., on Tuesday, March 15, 2022. Delta Air Lines said it’s working with Air France-KLM as the Paris-based airline considers joining in the bidding for a stake in Italy’s state-owned carrier. , Bloomberg

(Bloomberg) -- Delta Air Lines Inc. Chief Executive Officer Ed Bastian said the coronavirus crisis is effectively over as far as the travel sector is concerned, with demand comfortably outweighing any impact from Russia’s war in Ukraine.

Delta had the two busiest days for sales in its near 100-year history last week, while the North Atlantic market has been swamped with bookings despite the outbreak of hostilities in eastern Europe, Bastian said Tuesday in a briefing in London.

“People have decided to start traveling again,” he said. “And in the last three weeks the governments of the world have decided it’s time to go, that the Covid era is over. We’re moving into a period where we’re managing this virus, rather than being managed by it.”

The Russian invasion isn’t damping Americans’ willingness to visit Europe, Bastian said. “We saw a momentary little blip for about a week when the war started, but demand is strong.”

The CEO was also sanguine about the impact of the war on jet-fuel prices, saying that while the hit from crude is a “significant one,” carriers have had to cope with kerosene at similar levels before. The pent-up desire to fly is such that costs can be passed on in higher fares, he said.

“One-hundred dollar oil prices are not something that we haven’t already dealt with in the past,” he said. “The earlier part of the last decade, oil averaged north of $100 a barrel and the airlines did just fine. It just takes time for the impact to be passed through to pricing systems.”

Bastian said he remains skeptical about the benefits of fuel-price hedging after Delta dropped the activity in 2016 following loses that totaled $4 billion in the previous eight years as it sought to guard against hikes.

“We don’t hedge,” he said. “I’ve lost a lot of money doing it. I understand if you’re a smaller carrier you’ve got to have more risk control. But long-term I don’t think that it’s necessarily healthy. We can sustain a fuel spike.”