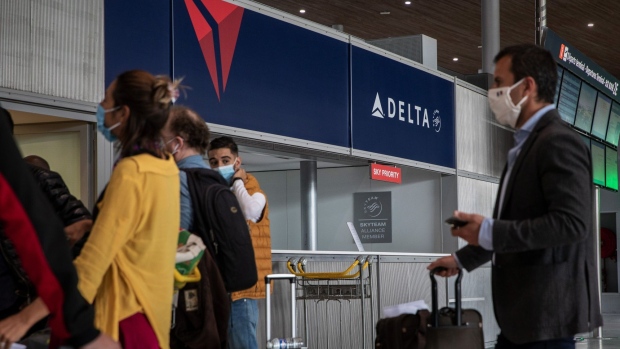 Delta Air Lines Inc. will probably stop adding flights to its schedule after the summer as the coronavirus pandemic continues to suppress travel demand.

The carrier will resume no more than 1,000 flights in August, Chief Executive Officer Ed Bastian said Thursday, and that likely will be it for the year. While passenger numbers are showing “slow but steady” increases, demand during the traditionally busy summer travel season will equate to only about 25 per cent of revenue a year earlier, he told employees in a memo.

The CEO’s caution points to the limits of a recent rebound in passenger totals from the worst of the travel collapse in March and April. U.S. airlines have been restoring some service as lockdown-weary customers start booking flights again, especially to vacation destinations. But it remains unclear what effect a recent surge in coronavirus cases will have on the fledgling recovery.

In the memo, Bastian reiterated his view that a return to normal customer volume is at least two years away. Like its rivals, Delta has slashed flying and parked aircraft. The Atlanta-based company has already offered employees a variety of options to take leave, and is now dangling packages for early retirement and voluntary separation.

Delta aims to recover to 30 per cent of year-ago revenue over the next two to three months while holding expenses at half 2019 levels, Bastian said a week ago. He forecast that the airline would break even by spring of next year. Delta is adding 1,000 flights in July as well as in August.

The airline has committed with peers to enforce requirements that passengers wear facial coverings. Delta has banned some travelers from future flights for refusing to do so, Bastian said in the employee memo.